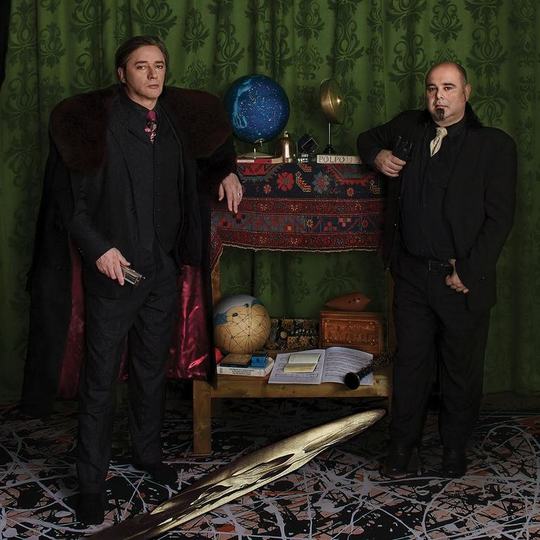 Teho Teardo has made a considerable impact on modern composition. His use of everyday objects to create intriguing rhythms and his deft ability in classical arrangement has seen him conjure some beguiling soundtracks in the last couple of years. Theatre soundtrack Ballyturk was almost stifling in its heat and his ‘soundtrack’ to the silent films of Man Ray, Le Retour à Raison. Musique pour Trois Films de Man Ray was a delightfully obtuse series of scurrying scores that did, indeed, dance to the visuals even if it’s not possible to dance with them.

Similarly Blixa Bargeld is no shrinking viole. A Bad Seed for a decade and core member of German industrialists Einstürzende Neubauten, he has helped define the sound of misery, angst and joy for many. Building on their initial 2013 collaboration, ‘Still Smiling’, which clicked and clacked through a series of philosophical musings and toy-shop percussion, Nerrisimo (meaning ‘blackest’ in Italian) plunges Teardo and Bargeld into a richer, more surreal landscape of fantasy and despair. Nerrisimo, for all its bleak outlook, is lovely.

The opening title track (English version), despite being a little, er, daft, is sumptuous. As Blixa chimes "Green is not the colour of my voice…it would deforerstate the surface, if I would be singing green" there’s a playfulness to this, clarinets and the sound of electronic signals oscillating gently in the background. But when he states “So I sing what I sing best… black” and a string quartet twirls in, it’s glorious and menacing.

With Nerrisimo much of the devil is in the detail – thrillingly so. Like the rather stupendous cover art that’s a reinterpretation of Hans Holbein's ‘The Ambassadors’ and provides the core premise for the video to ‘The Beast’, the small observations in this are hugely satisfying. When Blixa screeches like a bird at the introduction to the ‘The Beast’, it defines a sound that otherwise would remain an unknown joy. How much of this is percussion, or merely just a nose being blown, or a worktop being hit with a pencil? Ambiguous sounds swathe this album and shroud it in mystery, while string arrangements escalate the sense of grandeur and emphasise narratives in each composition. Specifically in ‘The Beast’, there are sounds that lull like some of Max Richter’s soft padded organs, and then backwards bell sounds and pizzicato violins pervert this sense of security without doing anything dramatic; they just step slightly forward from the back and linger for a while.

There’s pure fancy here; ‘Ulgae’, a romantic tragedy set in a petri-dish, literally imagines what bacterial beings would sound like if they sang songs of longing (they sound amazing). Take Eraserhead’s lady in the radiator, shrink her down more and invent a language for her. Sure, if you consider spotting faces in clouds a stupid waste of time, then this album won’t be for you.

Nerrisimo is an album you can spend a lot of time in. There’s a blend of feelings in this that are satisfying to experience. The arrangements are grander than ‘Still Smiling’ yet this isn’t pompous and still feels ‘crafted’ as though it was assembled in Teardo’s art studio. There’s also a sense of danger underpinning everything here, even when the stories are simple entertainment. Nerrisimo is indeed a dark piece of work, but it’s all the more sublime for it.