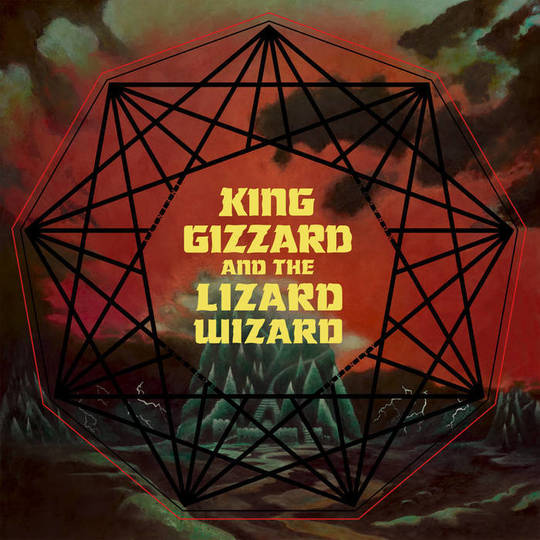 Having released four albums in the space of 18 months – and eight since forming in 2010 – King Gizzard & The Lizard Wizard win the award for most prolific band on the planet hands down. Although taken to their hearts by the psych rock fraternity, King Gizzard & The Lizard Wizard really are something of a law unto themselves. Over the course of their records to date - not to mention the band's incendiary live performances - they've happily fused elements of soul, metal, krautrock, jazz and punk into a melting pot that shows no sign of sticking to the same ingredients just yet.

So it should come as no surprise that album number eight continues in a similar vein, albeit a much heavier one than its most recent predecessor, last year's Paper Mâché Dream Balloon. Entitled Nonagon Infinity, it pretty much does as it says on the tin. It consists of nine pieces of music all linked together that actually sees final number 'Road Train' loop back into opener 'Robot Stop' at its close.

Sonically more in tune with the feral assault of their aforementioned live shows, Nonagon Infinity also represents their most effortlessly fluent collection to date. Indeed, those who've witnessed any of their recent gigs will recognise the majority of the record. With a relentless energy and no holds barred approach that sees the album last just a few seconds over 41 minutes, there's a distinctly live feel about Nonagon Infinity that while not quite capturing the intensity of King Gizzard & The Lizard Wizard in the flesh, does go some way towards demonstrating why they're held in such high regard by gig goers especially.

Opener 'Robot Stop' immediately kicks Nonagon Infinity to life. Think Hawkwind playing punk rock at breakneck speed while vocalist and main songwriter Stu Mackenzie sings lyrics like "Loosen up, tighten up, fuck shit up, don't forget about it!" as a cavalcade of riffs erupt all around him. It's a no nonsense sonic avalanche and one that continues straight through into the next song, 'Big Fig Wasp'. Essentially 'Robot Stop' part 2, structured around the same riffs and underlying narrative of "My body overload". If anyone ever had any doubts whether King Gizzard & The Lizard Wizard could replicate the seismic brilliance of their onstage performances this answers them over and over again.

The fast and furious onslaught continues with 'Gamma Knife', which adds Eastern tinged melodies to the now familiar loud, brash structures beneath them. The end segment even provides an opportunity for the band's two drummers Eric Moore and Michael Cavanaugh to assume centre stage, beating their instruments profusely until the next track 'People - Vultures' creeps in. Not for the last time on the record, the influence of Kill Em All-era Metallica comes to the fore. Chugging riffs dominate proceedings, while the Eastern flavour takes over once more which is eerily reminiscent of The Rolling Stones' 'Paint It Black', albeit ten times heavier.

'Mr Beat' takes its foot off the gas somewhat, instead choosing to fuse motorik beats with Seventies prog rock that sounds like Hookworms jamming with ELO. It's arguably the most psychedelic offering on Nonagon Infinity and possibly King Gizzard & The Lizard Wizard's first foray towards the dancefloor. Parity is restored for 'Evil Death Roll' which seems to combine two separate songs into one throughout its ferocious seven minutes before 'Invisible Face' drops a key or two back into lounge mode.

"I can feel the earth is closing underneath" sings Mackenzie on the primal 'Wah Wah' and while not as aggressive in stature as much of Nonagon Infinity, its impact is no less effective. Seguing incredulously into 'Road Train', it's a match that shouldn't work yet does almost effortlessly. Once more, first album Metallica immediately spring to mid as its verse-chorus-verse structure appears to be based around the Californian metal legends 'Whiplash'. One last massive squeal of guitars takes 'Road Train' over the finishing line and back to the start again.

There may be reference points aplenty throughout Nonagon Infinity and its creators make-up but King Gizzard & The Wizard Lizard sure know how to put their own spin on things. And in doing so have created their finest body of work to date.