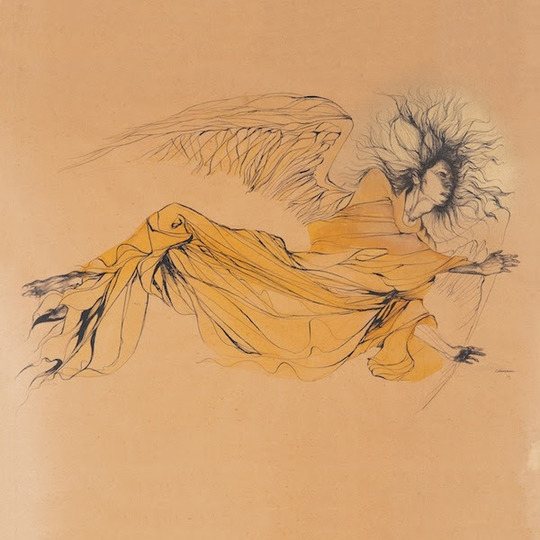 On her eleventh sole studio album Triangle, Susanna (previously of/as/with the Magical Orchestra) takes no half measures. The Norwegian goes all out in exploring spirituality in its broadest sense, through a variety of styles and tones from electro-pop, to twisted and distorted vocal lines and short and echoing laments. The end result, in its entirety, is gigantic. This impressive and brave effort happens over the course of 22 tracks and 70-odd minutes.

Although Triangle is sometimes so otherworldly that you cannot do anything but escape yourself, it is hard to escape the album’s themes. The clues are in many of the titles: ‘Holy Sacred’, ‘For My Sins’, ‘Before the Altar’ and ‘Born Again’ are just four, but there are others. And that is even before you look at the lyrics. Opener ‘Holy Sacred’ ushers us in with a modulated, layered doom-laden voice and the words "Nothing is holy / Nothing is sacred". The tone is set. This record is not necessarily profoundly spiritual— that implies something worryingly vague — but it is profound in the way it approaches the spiritual. A concept album it might be, but that concept is not particularly concentrated; there are pieces here and pieces there to pick up on and to pick out, looked at from different angles. Susanna has stated that much of the inspiration for the album has come from her own experiences with religion and spirituality, going back to her childhood. Many of the moods really show this, and the emotions they elicit in the listener are similar. Her voice, light and airy or foreboding when it suits, is still recognisable but is occasionally heavily processed. Here she walks a more ambitious and unconventional path. Some outstanding, softer melodies remain but are contrasted with more primal sounds and are presented in a more disconcerting setting.

Triangle can also be viewed in the context of the great amount of contemporary and avant-garde music that Norway is currently producing. Susanna has collaborated and worked with a great number of members of that particular scene. Meshes of Voice with Jenny Hval was a powerful and experimental reminder of both its creators’ talents as well as a fascinating insight into their working processes. Other collaborators appear here too, no more prominently than Jessica Sligter on the penultimate, minimalistic ‘Death Hanging’, rich, deep strings holding up the duo’s morose melody.

So much here drips with darkness. The bleakness is amplified when the voices become disembodied, distorted and altered as they often do. The pulsating ‘This Phenomena’ is at the more lethargic end of this scale and ‘Burning Sea’ at the opposite end; concentrated and intense once it reaches full flow. Sometimes the message of the voices is indecipherable, and at others crystal clear. Constituent parts can make up a complex textural whole. But it doesn’t matter, the mood is the important thing. In some ways, Triangle is a collection of 22 moods. There are tracks which light breaks through, though. The low-key electro-pop ‘Hole’ shows Susanna in a more straight-up three-and-a-half-minute pop-song. But there isn’t too much of this. Arguably the biggest and catchiest track is the spiky, staccato ‘In The Need of a Shepherd’, (not to be confused its low-key partner ‘Shepherd’, which uses that particular phrase as its centrepiece) with its repetitive ear-worming high-end melody coming against an increasingly dense backing that reaches a concluding critical mass of abrasive synth play.

Yet, with so much happening, is there a danger that Triangle is too much to handle, too large for its own good and even overlong? Somehow, no. The way it is structured and paced has to be deliberate. The contrasting movements, the peaks and troughs, the brightness and darkness and the intensity and calmness allow you room to think and to breathe. Triangle is truly massive and mesmerising. Every minute of it is worthy of your time, at the very least once. Pick it apart, listen to it in one go, or in a few sittings, change the order, make it the only album you listen to for a whole day or even a week. Do with it what you like, but take no half measures.

Wow to the Deadness