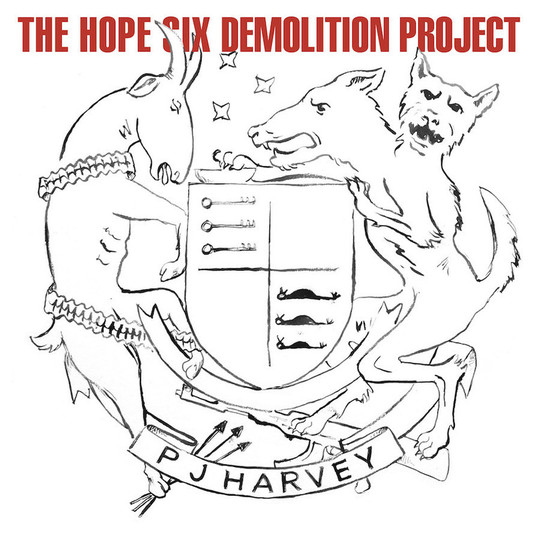 The phrase ‘musical reinvention’ gets bandied about pretty much every time a reasonably well-established recording artist finds out what a drum machine is. But perhaps the surest sign of the fact that PJ Harvey really has reinvented herself is that it’s taken about a decade to actually be totally certain.

Polly Jean Harvey’s elegiac 2011 masterpiece Let England Shake wasn’t her first record to deviate from the sound she made her name with. But in the past she would always came back to noisy blues rock, and her lyrics invariably excavated inner space and the savage side of the female experience. It now feels pretty clear that that’s all gone, with 2007’s underrated acoustic White Chalk the transition and Let England Shake the realisation. With ninth album The Hope Six Demolition Project it’s clear that 2004’s lo-fi Uh Huh Her was the final stand of PJ Harvey the rocker. PJ Harvey has become what music hacks tend to call a elder statesperson, and she's done it better than pretty much anyone out there.

The Hope Six Demolition Project is cut from superficially similar cloth to its predecessor: large band, lots of horns, lots of acoustic instruments, lots of John Parrish singing, with the – effectively asexual – lyrics presenting Harvey as a storyteller, offering research-based reportage of overseas atrocities. But the more you listen the more apparent the differences are, the similarities really a testament to the fact she really has shifted the fundamentals of what she does, the two records united by sounding so distant to the early work. I suspect it won’t go down quite as well as Let England Shake, partly because it’s fractionally less good, more because it’s harder to understand that its predecessor’s elegantly crafted evocation of the First World War.

Case in point, opening track and second single ‘The Community of Hope’ has already landed Peej in hot water with commentators who’ve taken it as a withering attack on life and conditions in the ghettos of America – specifically Ward 7 in Washington DC, a trip to which that yielded the lyrics “this is just drug town, just zombies… the school that looks like shit-hole, does that look like a nice place?”. Now I’m pretty sure that rather than the song being Harvey – who has never in her life written a lyric expressing a straightforward personal opinion – launching a savage attack on the poor of America, the song is quite the opposite. The deliberate glibness of her verse lyrics juxtaposed with the beauty of a chorus that seems wholly celebratory of the existing community and a sad elegiac coda (“they’re gonna build a Walmart heeeere”), plus the title of the album being a reference to the US’s controversial Hope VI urban renewal/social cleansing project would all seem to suggest it’s a song in which she adopts the persona of a callous, yuppie-ish outsider in order to protest Hope VI. Now that’s a fuck of a lot more than goes on in a Catfish and the Bottlemen tune, and it’s only the first track (and I could be completely wrong on its meaning, Harvey hasn’t given any supporting interviews).

Focusing not on its predecessor’s a single subject but informed by research trips to Washington, Kosovo and Afghanistan, The Hope Six Community Project is an intensely evocative but also decidedly ambiguous record. Lead single ‘The Wheel’ piles in with an awesome wall of dirty sax and tracer-fire guitar and lyrics that pull out from the image of four children being blown up at a funfair to the chilling chorus, “hey little children, don’t get disappear – I heard it was 28,000”. But what this figure actually means isn’t specifically clear – 28,000 is apparently the number of troops NATO anticipated deploying to Kosovo, the number of street-working children in Kabul as determined by a survey in the late Nineties and the number of minors killed by firearms in the U.S. between 2002 and 2012. Maybe it’s about one of them, perhaps all three; whatever the case it feels like a decidedly upsetting song about child collateral victims.

Elsewhere the record hops dizzyingly between location and tone: the enchanting, ethereal ‘A Line in the Sand’ would appear to be about the troubled UN Peacekeepers in the Balkans conflict; ‘Medicinals’ is a growling acoustic punk number about the disenfranchisement of Native Americans; ‘The Orange Monkey’, a stately, catchy duet with Parrish, seems to be about the eradication of culture by both war and progress. “ I took a plane to foreign land and said I’d write down what I’d find” she sings on it, but anybody looking for literal stories or some sort of protest record is liable to be slightly baffled. Though the songs seem united by dread of change and a sense of a humanity backsliding through conflict and globalisation, its far from an easy polemic – ‘The Community of Hope’ has already been heavily misinterpreted, and that’s one of the more obvious tracks on the record.

And yet I’m pretty sure this isn’t a failure of communication. Just as Let England Shake made use of a sense of the horror of the First World War far more than provide literal commentary on it, so the restless The Hope Six Demolition Project is more about a sense of a fractured, disordered globe, bursting with life and catastrophe, ancient cultures, new wars and old wounds. It makes you puzzle its meaning, ponder on it, burrow nagging ideas into your head. And it is another stupendous record, of the sort nobody else is making, or probably could make. Through all her changing shapes, Harvey remains one of a kind.