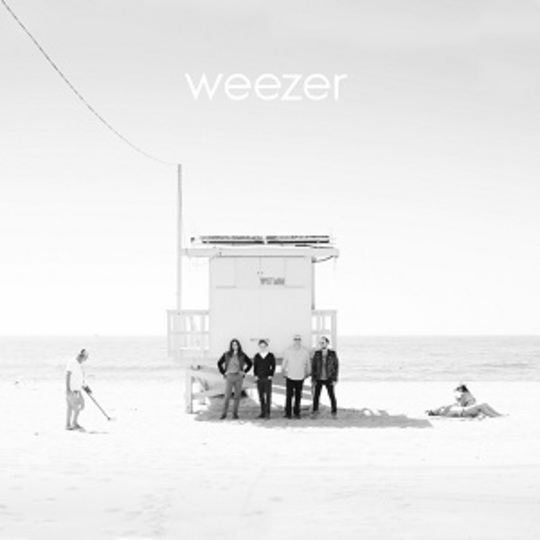 “Do you wanna get high? Don’t need no dinner tonight,” asks Rivers Cuomo midway through this, the tenth album in Weezer’s long and often undistinguished discography. Tempting, Rivers, but no; you are a 45-year-old grown man.

A little over 18 months ago, Weezer promised to take us ‘Back to the Shack’ on the surprisingly-really-good Everything Will Be All Right in the End. It was a thinly veiled vow to ditch the gimmicks and the kitsch that had plagued the second half of their career – ‘Pork and Beans’, the cover of Hurley, the Lil Wayne-featuring monstrosity that was Raditude, ‘Beverley Fucking Hills’ – and return to the catchy power punk that made them gods of emo back in their Nineties heyday.

And, to give the band their due, Weezer (The White Album), with its conflictingly ambitious yet unoriginal title, makes good on that promise. Power chords and major key riffs are abound, but then you probably didn’t need me to tell you that. There is even a hint of ambition – ‘Jacked Up’ is built around a jaunty piano line and a thoroughly enjoyable falsetto.

The problem is that, as previously mentioned, Weezer are in their mid-forties. Blue came out 22 years ago, when their lead singer was 23 years old and his fans not much younger. “Not all 19-year-olds are cool,” he sings on ‘Endless Bummer’. Well no, when you’re 45 you probably shouldn’t be thinking of 19-year-olds as cool. And even my flatmate, the living embodiment of the word 'manchild' doesn’t use the word 'bummer', because he is not Bart Simpson.

Perhaps trying to fight their arrested development is Weezer’s mistake. The opener, ‘California Kids’ – shameless Beach Boys rip-off intro aside – is a pining for adolescence. ‘Thank God for Girls’ sounds like the man who once yearned for “a girl who will laugh for no one else” saying 'No look, I get it now, women are people and look I’m a feminist as well.' It’s perhaps too harsh to say it’s the equivalent of Chris Finch asking 'How can I hate women? My mum’s one,' but we’re in the same ball park.

This is the key difference between Everything Will Be All Right... and White. The former was carried by energetic, sometimes brilliant, power pop songs that sounded like Weezer finally giving a shit for the first time in a decade and a half. White is... fine. It’s OK, it’s not bad, but it’s largely standard Weezer and the stand-out tracks are fewer and further between. Do you remember the first time? Oh yeah but we’ve changed so much since then, we’ve grown. Maybe Weezer should too.