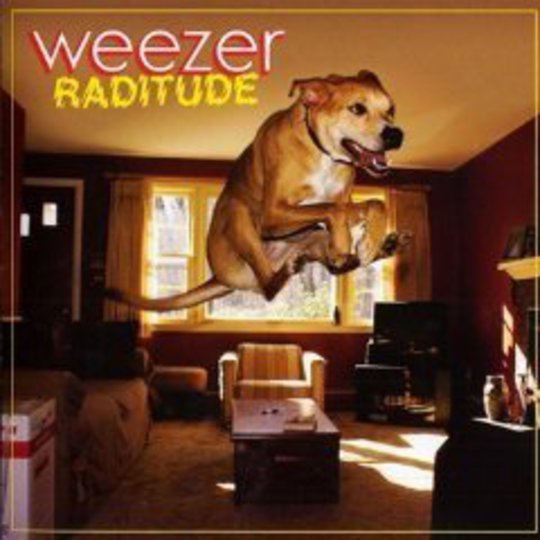 Weezer occupy an odd place in musical history, in that they are one of the worst bands ever to have made two of the greatest American rock albums of all time. That is not to mention the several moments of brilliance that have been illiberally scattered over the albums that followed Pinkerton. Their 2001 comeback was an anti-climax, but the squeaky clean pop-rock territory that The Green Album covered was different to that which they had covered before – and that, in its own way, was progress.

The problem is that they have made very little progress since then. To say that Weezer have been treading water on their last few albums, would be a colossally misleading understatement. So will Raditude come to represent the moment when the music world began taking Weezer seriously again?

Well, they’re not doing themselves any favours with that title. And that cover… But putting that to one side, and ‘(If You’re Wondering If I Want You To) I Want You To’ is a promising opener. It’s fun, but not over the top; it’s definitely catchy; it’s got geeky sincerity (“Your mom cooked meatloaf, even though I don’t eat meat/I dug you so much, I took some for the team”). Honestly, it’s everything that ever made Weezer great, and it’s reminiscent of, and easily as good as ‘Pork & Beans’ – but then again, the less said about The Red Album, the better.

With that example in mind, it’s no surprise when ‘I’m Your Daddy’ quickly falters. The sleazy riff in the verse is trivialised by awfully clicky handclaps, before the chorus becomes so bloated with cock-rock vulgarity it is entirely impotent. The brief Calvin Harris-esque synth break is similarly redundant, and leaves Weezer open to accusations of attempting to naively ride the wave of the zeitgeist.

These accusations are vindicated when Lil Wayne makes a guest appearance on the Jermaine Dupri-penned ‘Can’t Stop Partying’. Even without this inexplicable collaboration, the track is a poorly-conceived attempt to escape the constraints of guitar music, and write something that jocks can crunk to. When Lil Wayne shows up, the lack of sincerity seems to confirm that Weezer have once again achieved a rarity in contemporary music: they have become a parody of themselves.

Of course, not every song is meritless. ‘Trippin’ Down The Freeway’ stomps along satisfyingly (though doesn’t really go anywhere); the chorus to ‘Let It All Hang Out’ manages to roar without being too trashy, and the twisted harmonies of ‘In The Mall’ inject real pace and character. But all of this will be painfully familiar to Weezer fans, and will undoubtedly leave them all feeling a little cold.

In fact, the only really memorable moments of Raditude, are those which inflict frustrations way beyond those invited by college-rock mediocrity. ‘Love Is The Answer’ is another crude attempt to broaden the scope of Weezer’s sound. Unfortunately, the sitars and Punjabi vocals are a misguided foray into Indian classical music that comes across as embarrassing, even ignorant.

Raditude then, is in no way unique in Weezer’s recent career. When it’s good, it’s a surprise; when it’s bad, it’s incomprehensibly atrocious. But for the most part, it is dull, empty and devoid of sentiment, and that is its greatest crime. In general, the choruses are forgettable, the guitars are woefully exaggerated, and the quirkiness that made Weezer a band to be cherished now seems forced and stale. At least their fans can finally find closure: Weezer have passed the point of no return.