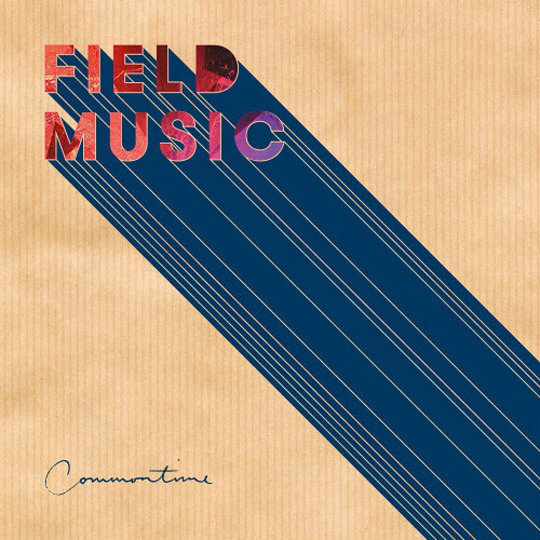 It's utterly baffling how Field Music remain such a minor concern in the overall 'arc' of British pop music. Here we have two gifted brothers who for over ten years have consistently released records of an almost overwhelming quality. It's not just indie blog dullards that seem to agree either, as evidenced by Prince's recent nod of approval toward the lead single from Commontime - 'The Noisy Days Are Over'. At six-and-a-half minutes in length, it's a playfully abstract prog pop number and a bold choice for courting radio play considering the wealth of would-be, could-be hits on here.

So – what do Field Music actually sound like? It's a question asked every time I fruitlessly attempt to big them up to disinterested friends. Problem is there's no definitive answer, but for the sake of journalistic indulgence; they sound something like a more audacious and intellectual ELO reared on Super Furry Animals. Of course, one will probably listen to their music now and write that comparison off as twaddle, but consider it a compliment to the band – they are somewhat indefinable.

Where their last LP Plumb felt like a self-contained journey with tracks that hooked and intertwined, Commontime feels more like a compilation of singular ideas and moments. For example, 'Disappointed' is arguably the poppiest track in the band's repertoire and it comes as a delightful surprise after the hefty first single which opens the record. Both Peter and David add a cheeky harmonious edge to the tune with a baritone refrain of the the track's title throughout the chorus. They have always held their influences on their sleeve (Talking Heads, Prince, Kraftwerk), making it easy to imagine a track like this becoming something of a left-field classic had it been released 30 years ago.

For those who preferred the slow roaming tempo that made up much of their 2010 double album Measure, 'Trouble at the Lights' offers a sinister synth build that repeatedly threatens to crescendo but instead throws up a pained guitar riff and a wild drum pattern over buried vocal wailing. Similar yet is the stunning ballad 'The Morning Is Waiting for You' with its grand, luscious production and romantic spread of andante piano, strings and horns. Imagine a pair of Sunderland lads channelling the extroverted richness of Lambchop or Todd Rundgren and you're more or less there.

For all it's successes, Commontime does suffer from pacing issues. Field Music have never been a band to put out pedestrian fast food music and their work comes with an expectation of rewarding investment, yet here things feel a little... ill structured. The quality of the music is without question but the means of consuming it sometimes hinders the listener from soaking it in at a favoured pace. These are pop songs; albeit with a great sense of technicality and skill that delegate the average three chord guitar band to Fischer Price territory. Field Music are, without question, national treasures and their music deserves to be heard – it's intriguing, funny and odd – ah bugger it, form your own opinion but honestly, they are brilliant.