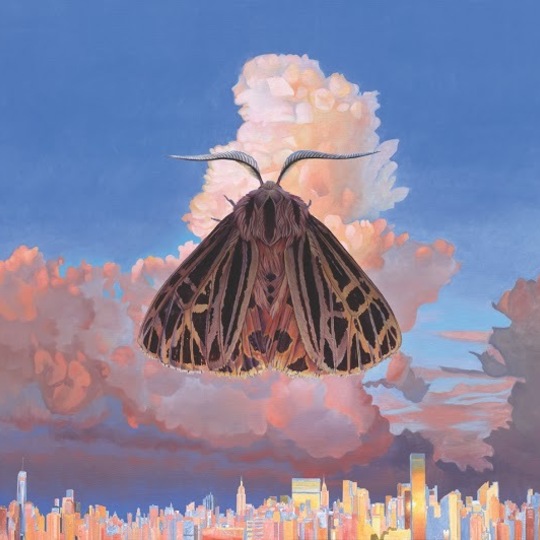 Combining Eighties-referencing pop with the sheen of angular electronica, Chairlift could be regarded as an ‘easy’ listen. When their second album Something came out in 2012, it felt like Caroline Polachek and Patrick Wimberly could have churned out perfect pop tunes for years to come: 'As long as they’re so damn catchy, I’m likely to enjoy them', I remember thinking. Still, far from merely repeating a formula, Moth, their ‘New York record’, sounds like they’re determined to make ‘easy’ surprising again. Their work on the spacious ‘No Angel’, one of the standout tracks off Beyoncé, together with Polachek’s gorgeous solo effort as Ramona Lisa (2014), hinted at a new sense of physicality and quirkiness. Both aspects are present here and act as welcome additions to Chairlift’s signature slickness.

Opener ‘Look Up’ is an exquisite appetiser: it contrasts Polachek’s searing vocals with a subdued mix of guitar, brass and electronics left lurking low in the mix. It manages to captivate you despite having no intention to settle for one particular mood. In a sense, it anticipates (and embodies) the titular shape-shifting of the following track ‘Polymorphing’. Here Polachek’s vocals sound more soulful than ever to instantly satisfying effect, while the overlap of airy brass and funk guitars conjures a retro vibe not so dissimilar from the one crafted by fellow New Yorker Blood Orange. That they decided to leave a disquieting synth burble at the beginning of and halfway through the song only adds to its preciousness. There’s even a solitary scream at one point, almost a teaser of the vocal ‘oddities’ to be found later on tracks like the fragmented ‘Ottawa To Osaka’ and ‘Unfinished Business’, where Polachek’s dramatic interpretation reaches for new levels of vulnerability.

Singles ‘Romeo’ and ‘Ch-Ching’, sitting next to each other, constitute a ‘smash-hit section’ of sorts: both manic, pristinely produced and hyper-catchy, they’re likely to be food for the poptimists. Whilst the former boasts a quasi-dubstep rhythm section and booming melismas, the brassy ‘Ch-Ching’ is a much more disorienting affair: a vortex of half-spoken syllables, whistles, choirs and desk bells held together by a protruding bass line. ‘Crying in Public’, opened by a shimmering instrumental section, takes up where Something cut ‘Cool As Fire’ left off: open-heart lyrics and a muffled, Sade-reminiscing sound. Polachek explained that the song is not about anything bad happening, but someone’s love making you more appreciative of little things. This arresting, deeply melancholic moment sounds almost necessary on an otherwise lyrically ‘overoptimistic’ record.

In fact, it is one thing to sing “I’m sorry I’m causing a scene on the train/I’m falling for you”, as Polacheck beautifully does on ‘Crying in Public’, and another to scream ‘I want to show you off”. The exuberance of ‘Show U Off’ and ‘Moth to The Flame’ doesn’t do it for me here, perhaps a side effect of the structural repetitiveness of the two tracks. Make no mistake, these are all energising pop tunes, but by the time you reach the seventh track, you’re left wondering how many of them you can take in one go. Which is why the subtle electronics of closer ‘No Such Thing’ are a welcome mood-shifter, a reminder of the overall substantial creative leap Chairlift have undertook with this record.