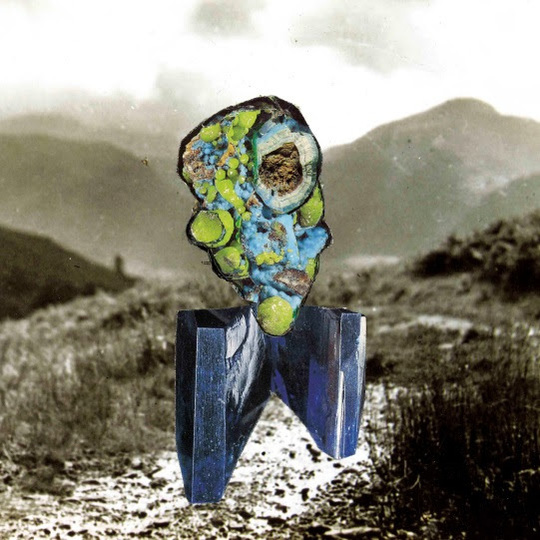 It's been a pretty good year or so for Richard Dawson. After signing to Weird World, the subsequent release of the spine-tingling Nothing Important at the tail end of 2014 saw the acclaim he’s received for a number of years in Newcastle spreading its reach beyond the confines of his home city. As such, there’s been no better time for a reissue of two of his long-since sold out records The Magic Bridge and The Glass Trunk, both of which were adored by a small but dedicated bunch. Unlike the traditional cash-driven pre-Christmas reissues, there's no unit-shifting bonus material here. Instead, the albums are presented in their original form, without gratuitous b-sides, demos or any other such frippery and it’s all the better that this is the case. You see, these collections are already entirely complete pieces of work and need no frivolous window-dressing to make them more appealing.

The opening to The Magic Bridge is a pretty perfect place for a new listener to be introduced to Dawson’s music. ‘Juniper Berries Float Down the Stream’ is the very definition of unhurried, a slow-building instrumental which starts off very deliberately, becoming more gently unhinged as it progresses. Even before his voice has been introduced, he foreshadows the intimacy which characterises all of his work because he wrenches such incredible feeling out of his instrument. Not for the last time on this album, he makes you feel like a bit of a voyeur, as though you’re peering through his bedroom window watching him hunched over his guitar as he exorcises his soul. Much of The Magic Bridge is uncomfortable listening for this very reason, but in the most wonderfully illuminating way.

It’s enviable enough that Dawson can provoke such emotion with the way he plays guitar, but it’s when he sings that he fully reveals the breadth of his brilliance. His voice is unconventionally huge, and at its apex, as on ‘Black Dog in Sky’, it’s like a wounded bear howling from the gut, chilling you to the bones like a North Sea gale. Like his guitar, though, it also creaks and breaks with pure feeling, enhancing the idea that you’re observing the most private of moments. On ‘We Picked Apples In a Graveyard Freshly Mowed’, for example, when he softly and sadly entreats “hold me and never let me go”, it’s a thoroughly desperate appeal.

The feeling of intimacy is galvanised by Dawson’s lyrical style on The Magic Bridge. It’s largely matter of fact, his words in isolation relatively stripped of adornment, but with his delivery he fires them with terrifying levels of emotion. ‘Grandad’s Deathbed Hallucinations’ opens with the starkest of lines in “as my Grandad lay dying in hospital”, before taking us on a detailed tour of the visions of a dying man. Clearly, then, this isn’t a record for the faint of heart, or someone looking for background listening. It’s the sound of a heart being torn open, not because Dawson seeks our approval in any way, but simply because he happens to be minded to get these sentiments out of his body. Indeed, you suspect that whether you’re listening or not to these incantations is of little consequence to him.

For The Glass Trunk, Dawson was let loose upon the extensive archives of Tyne and Wear Museums in pursuit of inspiration, perusing the letters and diaries which fill the tunnels which snake under Newcastle like some kind of underground secret history. It seems like the perfect task for an artist such as he, and the outcome was a weird, multi-headed piece of work which really allowed him to stretch his creative legs. It ended up consisting of seven entirely a capella folk songs, each followed by two sixty second guitar and pedal harp duels with Rhodri Davies. On the opening song ‘A Parent’s Address to His Firstborn Son On the Day of His Birth’, you feel like you can quite literally hear the ghosts of Newcastle’s history in the multi-layered vocals crooning “welcome, welcome, dear little stranger”.

The album’s highlight is ‘Poor Old Horse’, which is something of an archetypal Richard Dawson song, seeing him lament the fate of a condemned horse at the hands of the hapless axeman Dextrous Bill, the equally useless Ned and their unnamed foreman. The sheer rawness of Dawson’s delivery occasionally feels like he’s channeling the eponymous victim of the song. It’s arduous going, but because of the lyrical detail it’s also impossible to turn your attention away. Fortunately, he softens the impact of the poor equine bastard’s fate later with ‘William and His Mother Visit the Museum’, a beautiful tale of a near-blind boy having a day out with his Mam. This proves to be a necessary shaft of light on The Glass Trunk, given the 12 minutes of heartbreaking beauty of ‘Joe the Quilt Maker’ which appears later.

Dawson and Davies’ instrumental interspersions are glorious little experimental nuggets, as they apparently seek to offset the absence of instrumentation in the songs by making these pieces as clatteringly heavy as they possibly can. Dense as these pieces are, they provide some breathing space from the intense tales spun by Dawson, all of which are entirely gripping.

Both The Magic Bridge and The Glass Trunk are challenging pieces of work, but they’re worth the investment of time and emotional energy, because the depth and richness they display are so fantastically enriching. Dawson transcends epochs, because the humanity in his songs is so universal that they could have been made at pretty much any time in history. He’s an artist who is genuinely without parallel, and if there’s even a grain of justice in the world then these two reissued albums will retrospectively enjoy the appreciation they deserved at the time of their release.