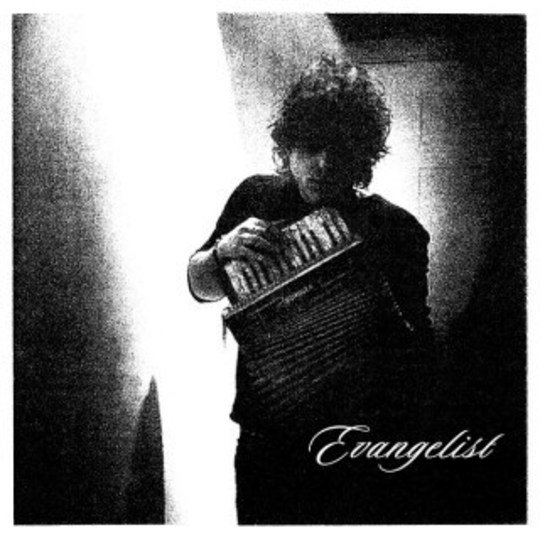 Sometimes when albums come up for review, our esteemed reviews editor picks the choicest paragraph from said release's press documentation to tempt and tantalise writers in. Even with a corp of reviewers as suave and sophisticated as those of us, there are albums that come along that you have no idea about, but which tempt you in. At times, what can result is a tumultuous love affair (for me, this happened this year with Mini Mansions, for one). And then there are other moments, moments when an album is announced which, as a writer, you just have to write about. This, the debut, and sadly only album from Evangelist (Gavin Clark, allied to Pablo Clements and James Griffin of Toydrum and Unkle), is one such.

Let's get it out of the way early on: this is a great record. It is one of 2015's best albums, hands down. If it gets lost in the welter of holiday releases it would be a travesty. The amalgam of Clark's one-of-a-kind vocal and Toydrum's inventive soundscaping would, under normal circumstances have Evangelist marked out as a modern classic. 'Spirit' grooves ominously as Clark cries “The Spirit is upon me, let me speak. Who is hungry, who is hungry? Let them eat.” 'Same Hands' invites us insistently to "follow the Father, follow the Son. I'll take you there" as Clark's vocal threatens to crack. On the mournful 'Never Fell This Young', with its layers of strings and controlled crescendos, the perfect backdrop is provided for the full emotional gamut to be run vocally. 'God Song' features a glorious bass riff, as Clark's prophetic protagonist reaches full pelt. "This is a God Song, let somebody listen....". In fact, by the time closing track 'Holy Holy' fades away, the sense of that we've been listening to a record which is not just enjoyable but downright important refuses to disappear. Gavin Clark has never sounded better. Vocally strident, singing stories which resonate to the deepest level of the human condition, augmented as never before by Toydrum's inventive and sympathetic instrumentation, This feels like it should have been the start of something truly spectacular.

Which makes the album all the sadder. Perhaps you clicked on this review because you just read reviews here as a matter of course. Perhaps the name of the band intrigued you. Perhaps, though, you know something of Gavin Clark and his story. You'll know that this album is released posthumously, faithfully finished by Toydrum after his untimely passing. I never knew Gavin Clark personally, but somehow, predominantly through his work with his previous band, Clayhill, I felt like I knew him. Watching Clayhill in tiny clubs in the last decade as their soaring, transcendent songs lifted listeners to the heavens, I felt as if I had found a musical kindred spirit. Clayhill were one of the best bands I ever saw live, a perfect fusion of melody and passion which has not been surpassed by a folk-tinged band that has followed after them. What elevated them finally above their contemporaries was Gavin Clark, a man for whom phrases like 'singular talent' feel pathetically lacking in seeking to describe just how special he was as a songwriter and performer.

That 'Evangelist' marks one of the final chapters in his musical legacy is one of the saddest musical moments of 2015, notwithstanding its splendour. Do not miss this record. More than that, find anything you can that he was involved in, be it with Unkle, Clayhil or Sunhouse, or as a solo performer, and let the sheer weight of the beauty of his voice and his songs sink in..

Apologies if you feel I have not done this album justice. It feels like it would be impossible to do. Rest in peace Gavin.