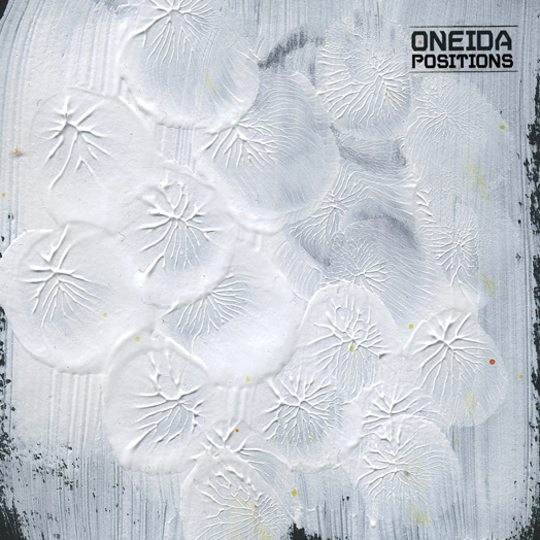 Brooklyn’s Oneida have been a force in experimental rock for almost 20 years now and in the last seven or so of those they have really eased into Doing Whatever The Fuck They Want. In 2008 they started their 'Thank Your Parents' album trilogy with Preteen Weaponry, a 45-minute track divided into three sections, followed the next year by the surprisingly-good triple album Rated O and completed in 2011 with the drumless avant-garde drone noise of Absolute II. It has now been three years since their last studio album and the band seem to have mostly content to have engaged in other sorts of ideas and projects. Thus we come to Positions, an EP containing two covers and one new song.

The thing I've always found most admirable about Oneida is their single-minded approach, their unpredictability, their desire to never do the obvious or expected. So if, as the press release concedes, an EP consisting mostly of two covers seems like a bit of a step back for the band, it most emphatically is not.

Obviously part of this is the choice of covers. It's not like Oneida have done a soulful rendition of a pop song or anything. That's definitely not their style. First up, then, is 'S.P.Q.R.', which first appeared on This Heat's magnificent 1981 album Deceit, an album that still sounds like it could have been recorded last month. While your writer would have chosen 'Sleep' or 'Paper Hats', your writer is also not in Oneida and 'S.P.Q.R.' is also a damned fine song. The Oneida version manages to capture the nervous, shaky energy of the original while adding a little more bombast and an extended wig-out ending because Oneida. It's nothing mindblowing but it's enjoyable enough.

The filling of this cover sandwich is original composition 'Under Whose Sword', a track that manages to hit that sweet spot between relaxing and ominous drone. Based around a dripping two-note bassline and improvised guitar noodles it manages to turn these basic elements into something pleasingly hypnotic.

The real meat of Positions, though, and accounting for 16 of the 25 minute run length, is their reimagining of Chrome’s ‘All Data Lost’. I say ‘reimagining’ because the original, while diverting, is three and-a-half minutes and kinda nothing-y and the Oneida version is a hell of a journey. Five or so minutes of disorientating noise await the listener before a drumbeat mercifully starts up and it becomes a krautrock odyssey while still remaining weird as hell. The fact that it it stays coherent at all is entirely due to the drumming and proves, once again, that Kid Millions is one of the greatest unsung talents in modern rock drumming.

While Positions is far from the best thing Oneida there’s plenty to offer the patient listener with a taste for the avant-garde. Furthermore, it shows the band are as ever willing to push the boundaries of rock music and explore new avenues, and might even hint at a new studio album at some point. It can’t come soon enough for my liking.