People, When You See the Smoke, Do Not Think It Is Fields They're Burning 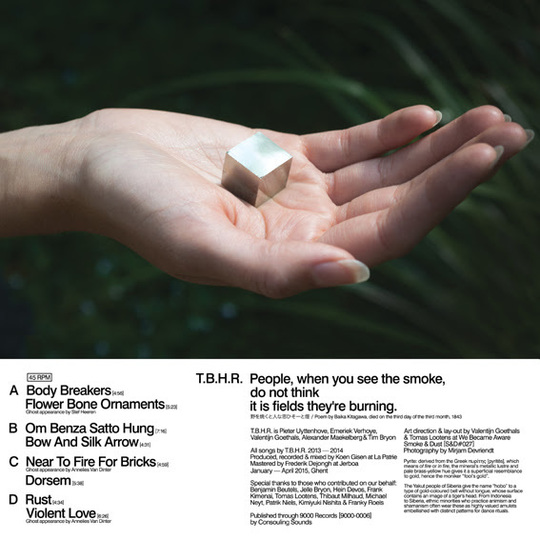 Belgian quintet The Black Heart Rebellion are one of those bands one cannot help but struggle to talk about. Their last album Har Nevo, released back in 2012, was the sound of a band apparently stuck between two occasionally contradictory paths. There were attempts to capture the intensity of visceral hardcore, combined with leanings towards ritualistic post-punk. On new album People, when you see the smoke, do not think it is the fields they are burning the latter tendency has very much won out.

‘Body Breakers’ opens proceedings with atmospherically sparse guitar, gradually easing its way towards more forceful climbs. Never quite reaching optimum velocity, it is rather indicative of much of People…’s overall methodology. This is slow-burning music that looks to envelop and intoxicate its listeners through a diet of drones, pulsating riffs and unusual percussion sounds. Interestingly, even at the record’s most up-tempo, the vocals of Pieter Uyttenhove remain clean – a notable change from previous releases.

Unfortunately, when the band are aiming for cultic displays of power they sometimes veer dangerously towards pastiche or pompousness. On ‘Bow and Silk Arrow’, for example, the group’s attempts at a ritualistic vibe find them dabbling in snappy Sixties psychedelia. Parts of closer ‘Violent Love’, meanwhile, could be accused of overdoing the melodrama just a touch. This is all the more glaring given the rather minimalist mode of attack utilised throughout the album, as if the group feel that this rather bare boned approach needs filling out – sadly to the point where it crosses into quasi-theatrical gothic excess.

Having said all that, there’s something really rather impressive about a band that set their stall out so clearly in a direction that seems counter to any prevailing trends. This album actually sounds quite distinctive: the product of marrying the group’s roots in hardcore with a highly introspective post-punk sound, shades of neofolk and a vaguely black metal-esque atmosphere. More importantly, it remains compelling throughout, proving both more evocative and more consistently engaging than its predecessors.

This is best displayed in a run of three tracks during the album’s second half. ‘Near to Fire for Bricks’ is genuinely haunting, almost reminiscent of the best of Coil or Current 93 in its mystical etherealness. ‘Dorsem’ acts as another dose of quiet before the storm, but is genuinely menacing. It constantly threatens to explode, only to teeter agonisingly on the brink throughout. The explosives are left to ‘Rust’, which manages to avoid the aforementioned misdirection of ‘Bow and Silk Arrow’, instead being a rare (in 2015) enthralling take on quiet/loud dynamic range.

Cynics might say it’s the sound of a band taking themselves a touch too seriously. However, People… really is the sound of a band working impressively hard to conjure up their own sound, and if that in itself doesn’t merit The Black Heart Rebellion’s seriousness then I’m not sure what would.