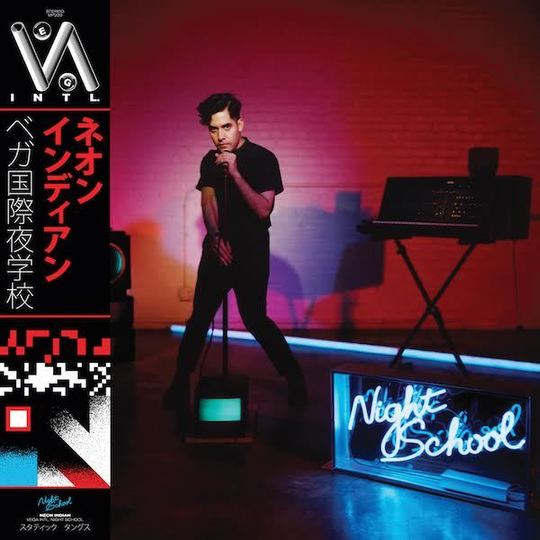 There is really nothing to see here. Neon Indian is boring. Alan Palomo, the brains behind the band, has released another superb album, and like Psychic Chasms and _Era Extrana, Vega INTL. Night School_ will be credited as one of the best albums of the year. And like the aforementioned albums, the music is enriched with so many resplendent microcosms of sound that cute, fabricated genre-labels like 'Super-Nintendo-Electro-New-Wave-Dixie-Cup-Pixie-Cut' are inevitable.
<br

‘The Glitzy Hive’ will loop repeatedly at all the college parties. Virginities will be forever lost to a song called ‘Smut!’ Festival and concert goers will capitulate into cathartic movement with ‘C’est La Vie (say the casualties!).’ Somehow the band has managed to release an even more danceable album than their past chillwave-meets-ad-infinitum-genre ventures, and the sheer unpredictability of Palomo’s brilliance is all too predictable by now.

After four years without a full length album, an uninspired return would have shaken things up a bit, but Palomo insists on evolving while remaining true to the magnetic elements that marked the band’s previous efforts. Vega INTL. Night School combines the Eighties party-like atmosphere of Psychic Chasms with the flourishing boldness of Era Extrana. From the sparse yet inoculating 'Hit Parade' on, the album is steeped in myriad synths and sonic surprises, which will come as no surprise to anyone. When Palomo and his smooth criminals blindsided everyone and released insta-stuck-in-the-head single ‘Annie’ earlier this year, it was a foreshadowing of what was to come - an album overcrowded with promenading thrillers. Otherwise, as one would anticipate, the same-old-same-old recipe of shapeshifting, euphoric melodies achieved via extremely intricate arrangements.

There is usually a spellbinding moment in the greatest Neon Indian output that transforms the song from a 'merely' catchy tune to a perpetual force that surges with every subsequent listen, like the brief shimmer of laser stabs and synths right before the three minute mark on 'Street Level’. The sleek polish of Era Extrana’s ‘Polish Girl’ and ‘Halogen (I Could Be A Shadow)’ is replaced with more frollicking rythms, and Palomo’s vocals are accentuated more than past Neon Indian projects. On ‘Dear Skorpio Magazine’ and ‘The Glitzy Hive’ he sounds as equally indebted to Michael Jackson or Prince as Ariel Pink or Depeche Mode. On the surface ‘Slumlord’ is one of the most patternized recordings in the band’s history, but it sonically manages to capture all the disco-offspring manifestations the band has pioneered over the years, and crescendos even further on ‘Slumlord Re-Release.’

Following a torrent of drone-like, computerized noises and a resounding burst of scintillating synths, Palomo doesn’t just exude an exacerbated degree of confidence on ‘C’est La Vie (say the casualties!),’ he is downright cocky. Belting at an almost alpine-level octave compared to most of his Neon Indian arrangements, it doesn’t take long before the chorus pyramids into a liberating anthem that demands repeated listens. On ‘61 Cygni Ave.’ the guttural electro-reggae sound they wield earlier on ‘Annie’ is much more prominent this time around, especially as Palomo channels Inner Circle’s ‘Bad Boys’ by crooning “what you gonna’ do when they come for you?” on the chorus. He gets even more nostalgic on the album’s finale, trajecting an unmistakable, eerily similar Prince ambience on ‘News From The Sun (live bootleg).’ Obviously, given that description, the song, in a word, is incredible.

With its unfurled imaginativeness, Vega INTL. Night School is unimaginatively the album you would expect from Neon Indian by now - one that comfortably and sublimely manages to work inside and outside of the expectations set by their previous work. Nauseatingly exceptional, it will continue to radiate in fans’ collective conscious long after the release of whatever future projects lie on the horizon. Writers will scramble to find scholarly-sounding euphemisms other than “awesome” to describe it. You’ve memorized the drill by now, and there is really nothing to see here.