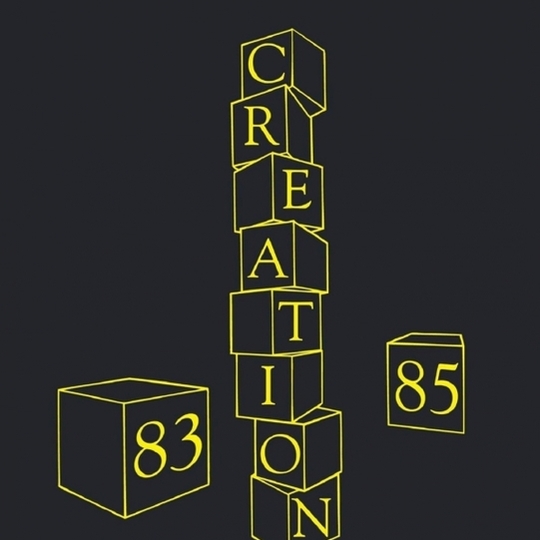 "We'll pretend our lives have just begun, and make believe that there's no end, and never grow old" - (The Pastels)

The rise and subsequent fall of Creation Records has been well documented over the years – most recently in 2010's documentary Upside Down, which focuses more on the label's later era and the commercial success of artists like My Bloody Valentine, Oasis and Primal Scream. However, 1991's Creation Soup boxset aside, there's been little celebrating the label's formative years.

Started in 1983 by (then) young entrepreneur Alan McGee, initially as a sister project to his club night The Living Room, it's perhaps fair to say no major record label would have touched any of them with a bargepole at the time - McGee's own Biff Bang Pow! and a fledgling Jesus & Mary Chain among them - so Creation was set up as an outlet to release records by the bands who played his club night. Inspired more by Dan Treacy and the Television Personalities' Whaam! Records than the archetypal indies like Postcard or Rough Trade, even McGee himself admits now he didn't really have a clue what he was doing back then.

A £1,000 bank loan paid for the label's first release, a 70-seconds long rant called ''73 In '83' by The Legend!, better known these days as music journalist Everett True. Featured here in all its glory along with b-sides 'You (Chunka Chunka) Were Glamorous' and 'Melt the Guns', it probably won't go down as the most musically memorable record Creation ever put out but it laid the foundations for what followed.

Which is where Creation Artifact: The Dawn Of Creation Records 1983-85 comes in. Charting the label's early history over five CDs housed in an elaborately decorative boxset featuring interviews with key players, original artwork, band biographies and a comprehensive 12,000-word essay from esteemed music journalist Neil Taylor. While there may be an argument that instrumental demos of unreleased singles by The Jasmine Minks might not necessarily be everyone's cup of tea, it paints a picture of McGee and his cohorts' mindsets at the time.

The first two discs contain a glorious selection of 45s including The Revolving Paint Dream's classic 'Flowers In The Sky', a pastoral precursor to the impending C86/cutie movement. The Pastels' 'Something's Going On', originally released a year earlier as part of their debut EP Songs for Children and subsequent follow-up 'Million Tears' highlight why the band are still held in legendary status today. McGee's own outfit Biff Bang Pow! were no slouches either. Debut release 'Fifty Years of Fun' borrows the backline from Spencer Davis Group's 'Keep On Running' to maximum effect, turning it into the greatest single The Jam never wrote.

Although things really took off for the label in 1985 when The Jesus & Mary Chain's 'Upside Down' landed unceremoniously against a rising tide of big hair, bad style guides and Band Aid, it's two other releases from the same period that stand out. Meat Whiplash may only have released one record in the shape of 'Don't Slip Up', but its amalgam of brutal noise, agitated rhythms and deadpan vocals undoubtedly paved the way for psychedelic noise bands like My Bloody Valentine and Ride. And Primal Scream's finest hour might just have been their first if dainty Byrds-esque debut 'All Fall Down' and its even better flipside 'It Happens' ("Reverberation travelling in time") are anything to go by.

The third disc features a selection of rarities and live tracks including a demo version of 'Wouldn't You' - later one of Biff Bang Pow!'s most popular songs - by The Laughing Apple, the prototype Creation band including both McGee and future Primal Scream member Andrew Innes among its number. A four-track demo of The Jesus & Mary Chain's 'Just Like Honey' also makes interesting listening alongside John Robb's Membranes whose contributions here ('I Am Fish Eye' and 'Gift Of Life' from the 1985 album of the same name) reveal a subversive energy not always present in de rigeur post punk acts.

Most of the live tracks are taken from a compilation LP Alive In The Living Room, originally released in the summer of 1984. Prior to one of the tracks - 'Rock'n'Roll Shoes' by The Mekons - McGee can be heard discussing whether the band were worth the £65 fee he paid them that evening! Elsewhere, two previously unreleased live recordings of McGee's beloved Television Personalities make up the CD, with a combination of demos and radio sessions making up CDs four and five respectively.

Overall, Creation Artifact... serves as a fitting tribute to a label that rekindled the independent spirit within the music industry, not to mention being responsible for putting out a plethora of incredible releases in the process. Furthermore, anyone of the belief Creation Records began with Loveless and ended when Noel Gallagher shook hands with Tony Blair really needs this collection in their lives. An essential purchase.