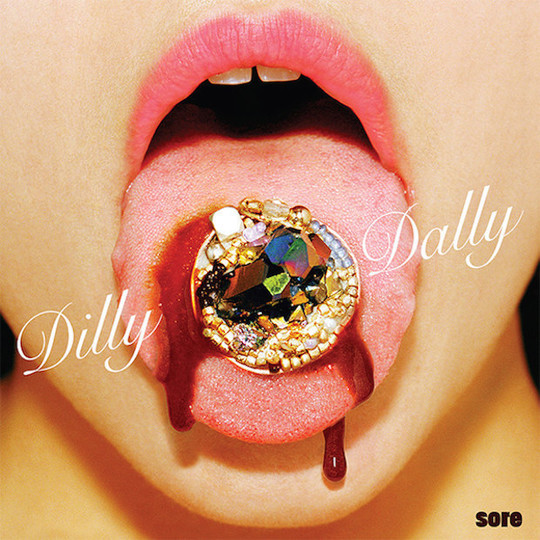 It’s kind of great, isn’t it, when you encounter a band that is new (to you) yet brings with it a sound and aesthetic that slots perfectly, filling some kind of void you never quite realised was actually there.

Of course, Dilly Dally aren’t new in the freshly-hatched-into-the-world-of-music sense. Their biography tells of founders Katie Monks and Liz Ball’s long musical connection, of six years 'drenched in the Toronto music scene', of 'working shit jobs, being in debt, partying too much and hustling in a band'. By new I mean in the sense that their debut album, Sore, has just been released, and that their music is just starting to be more widely heard and appreciated.

But if said music sounds fresh - to these jaded ears at least - it also sounds like it ought always to have been around. The album opens with a blur of fuzzed guitar and then a brilliantly roared count in, “one… two… three… four…”, in Monks’ already-shredded, raw and grainy voice. After that guitars crash, but lighter harmonies also surface, while the lyrics – deliberately sketchy, semi-audible, making the listener strain to understand, work at it, work it out – arrive with a delivery that is at once guttural, poetic (“mercuries are falling from her eyes again”) and sensual, the catches in the vocal a match for the buzz of the frenetic instrumentation. It’s quite a start, an invigorating and deeply authentic invocation of the song’s title: 'Desire', served up in an impressionistic but never euphemistic or coy way.

These are songs about lust and life, about feelings and experiences, but told in such a way that they sound box-fresh. There’s anger, cathartically expressed on the likes of the terrific, bracing 'Purple Rage' and 'Snake Head' (someone or something accused of “fucking with my shit” gets very short shrift), there’s loads of sex: from the opener’s furious lust to The Touch with its panting and yowling. 'Next Gold' tells of “making love in the parlour” while, in 'Green', Monks “wants you naked in my kitchen making me breakfast”, which seems like a fair enough demand tbh.

One of several highlights is 'Snake Head', a herky-jerky period piece (sorry) that anyone who has ever menstruated will relate to in spades. When Monks sing/screams that “snakes are coming out of my head / And there’s blood between my legs”, or matter-of-factly bemoans the fact that “these painkillers are no fun” it makes you wonder where all the other funny-and-furious, real and raw songs of women’s everyday experiences are, so apposite and essential does it sound.

Also wonderful are 'Next Gold' – a song of contrasts, the guitar sounds switching from indie-jangle to MBV-alike shred, the vocals from high harmonious “oohs” to gruff growls – and the exhilarating, bracing 'Purple Rage' that follows. This great sequence, more or less in the album’s centre, continues with 'Get To You', slightly slower of pace and quieter of voice, downbeat and utterly compelling.

This is a band that clearly relish this type of switch, not only with their mid song loud/quiet changeovers à la Pixies (Witch Man, Ice Cream), but also by throwing in curveballs that change the album’s internal trajectory. It’s one such moment that closes the album, piano ballad (yes, really) 'Burned By the Cold': sincere, utterly lacking in guitar noise, its intensity conveyed this time solely by the raspy vocal. That it makes no less of an impact than the fantastic confections of noise and thunder that precede it only goes to demonstrate the nous behind the fury, the musical smarts governing the debut of this terrific new band. Dilly Dally, where the hell have you been? We’ve been waiting for you.