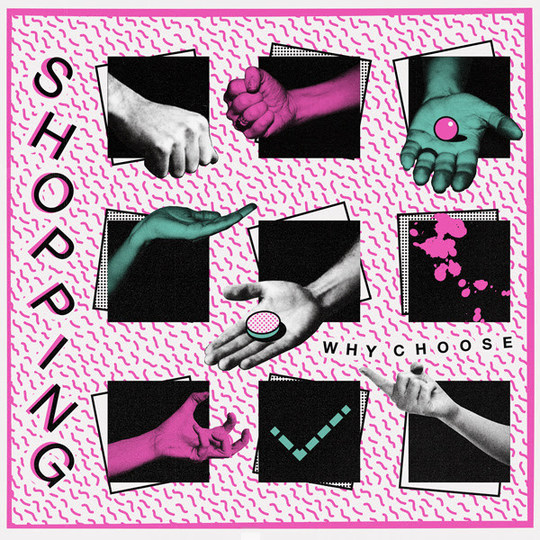 Ten years ago, you couldn’t move for post-punk. Even as early as this point in most record reviews of guitar music, you’d more likely than not have hit the word ‘angular’ by now. Today, it’s quite different – as the sound became close to ubiquitous, it suddenly seemed to die off just as suddenly.

Shopping’s second LP – as unabashedly post-punk as it is – doesn’t really feel like a latecomer to the party, nor the herald of a spurting renaissance of the mid-Noughties. Instead it feels like a record which could have been made whether or not the post-punk revival of the last decade happened at all. It’s a direct descendent of some of the original pioneers – leaping the influences since – and finding its closest alignment with the simple, snappy arrangements of bands like Le Tigre, especially with their ruminations on gender and capitalism.

Shopping manage to simultaneously sound amped and jaded. The lyrics often drag themselves through self-reproach, dissatisfaction and boredom. But the music is never less than perky. The album opens with a thumping bounce, a natty little bass kick-bass line combination which sets the mood into motion. Call-and-response vocals barely let each other finish before they leap head-first into the mix. Syllables rattle out like they’re going out of fashion across ‘Straight Lines’. It’s a tightly wound and energetic package.

For all its pep, it can lack heft, however. Shopping are not fans of chords, for instance. Each guitar line is plucked out as a succession of single notes, with a clean, close-to untouched tone. For the most part, the deceptive sparsity of these pieces is a strength – letting detail do heavy lifting rather than distortion, and letting the spaces between the three simple instruments provide a texture of its own. Having said that, the chaotic climaxes of songs like ‘Say It Once’ do make you wish they’d let themselves get a bit noisy a bit more often from time to time.

The far bigger issue is how the production neuters the rhythm section. With songs as lean and svelte as these two-minute poppers, you want snares which whip and crack, providing a rock-steady framework for the cleanliness of the guitar lines. Not to mention something you can really use your feet to. Instead the drums come off sounding a little thin, the hi-hits hissing a bit; the snare buried in what’s already a shallow mix. Live, Shopping are a disco powerhouse, as well as building on their fantastic DIY aesthetic. But on Why Choose?, they sadly lose a lot of their manic, propulsive momentum.