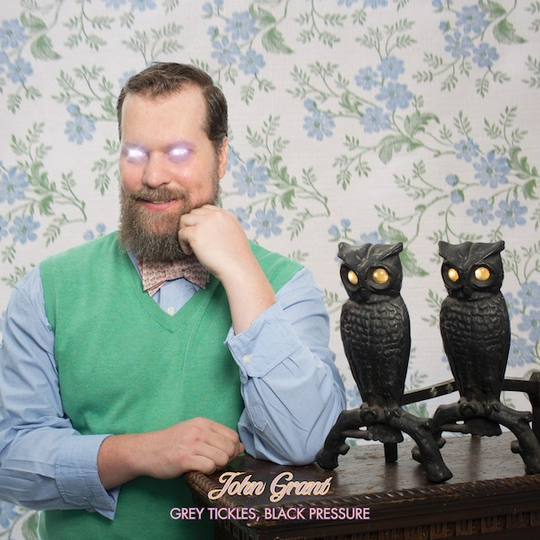 Entropy – expressed, as you’ll recall, in the second law of thermodynamics - states that everything in nature, on a long enough timeline, will result in chaos and decay. Everything you hold dear – your home, the love of your life, that tiny brass trophy you won for coming third in the long-jump at your primary school sports day - will collapse, die, and shatter; leaving nothing but a useless and unfeeling pile of atoms.

It’s this headlong hurtle towards the void that has proved perfect lyrical and sonic foil for confessional singer-songwriter John Grant on Grey Tickles, Black Pressure – his third solo studio album. Indeed, the initially headscratch-worthy title itself is an obscured reference to the subject matter within – raw translations in Icelandic and Turkish for ‘approaching middle age’ and ‘nightmare’, respectively.

Not that Grant plans to go gentle into that good night, however. The album’s spoken word introduction - a recording of biblical verses extolling the virtues of patient, kind and unfailing love - swiftly collapses into monstrous distortion. Less than a minute in, and the raging against the dying of the light has already begun.

What follows is a blend of vintage Grant, and a logical progression from where he left off on Pale Green Ghosts. Where his second solo album opted for pulsating 4am electro, Grey Tickles… sees Grant segue sideways into the sensual realms of funk. The Colorado-born singer has long relished experimenting with synthesized textures, and tracks like ‘Snug Slacks’ and ‘You & Him’ see Grant and collaborator Bobby Sparks painstakingly craft delicious sine waves galore. The latter is particular highlight, with skin-crawling bass grinding wonderfully against sizzling percussion.

Lyrically and vocally too, Grant is on fine form throughout. On ‘Disappointing’, his luscious baritone gives way to a soaring chorus before once again plumbing sordid depths in the verse that follows. The track’s premise is on the face of it a simple one, a list of things that, despite their undeniable lustre, pale in comparison to a new lover: “Bassoons, trombones and french horn sections, bass clarinets and string art collections”, Grant growls, before appending a septet of Slavic writers and composers. Special gusto is saved for the names of Russian composers Scriabin and Prokofiev, whose monikers he swirls around his palette appreciably during delivery. The track is a rollicking synthesized nod to 'The Sound of Music’s ‘My Favourite Things’, and you’ll never hear Julie Andrews in quite the same way again.

Of course, this being a John Grant record, there’s darker stuff too. Throughout Grey Tickles… there’s a sense of deranged fantasy, an element expressed sharply in the album’s hyper-theatrical pre-release trailer in which a blood-spattered Grant wields a mallet. It’s an image explained by the artist as a depiction of how he feels whenever he is called a ‘faggot’. In song, these emotions are expressed through an apparent proxy, an amped up fictionalization of Grant himself, whose point of view is seamlessly shifted to and from. It’s art-rock in the greatest sense of the word.

On the title track we hear Grant blinkeredly compare his heartbroken situation with that of children suffering with cancer before begrudgingly conceding “I can’t compete with that”, while on the aforementioned ‘You & Him’ he spits irony-laced barbs at a former lover before concluding, “You and Hitler ought to get together / You ought to learn to knit and wear matching sweaters”. The framing may be comical, but the message is ice-cold and crystal clear. Perhaps most skin-crawling of all however, is the cold and callous skills of manipulation exhibited on ‘Snug Slacks’ – “Is it difficult for you to be so beautiful, or do you find the advantages outweigh the disadvantages?”, Grant intones mechanically, probing his interviewee’s pressure points and insecurities in the manner of a psychiatrist.

Grey Tickles, Black Pressure is a rich, dense and rewarding album. Dig deep into it and watch it envelop you - decay and chaos has rarely sounded so seductive.