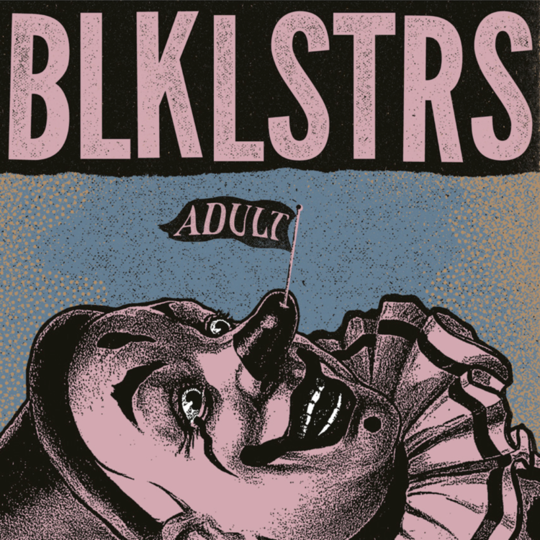 It has probably happened to most of us. A video is posted on your Facebook feed by a friend, or more than likely a friend of a friend, so you click on it. It’s an anonymous foot kicking the shit out of a plucked and gutted chicken carcass. It’s kicked everywhere, across a tiled floor, into a washing machine, against skirting boards again and again, until it is a puddle of pink, fleshy, gloop. It’s unbearable. Yet it’s impossible not to watch. In its entirety. A couple of times.

Adult is that video as sound. It’s the sound of a foot kicking the shit out of an uncooked roast chicken. Leeds quartet Blacklisters’s second album is an assault; it’s tasteless, depraved, morbidly fascinating and an endlessly addictive. From the off the flares are lit. “I’m not messing around here”, vocalist Billy Wood drawls in the opener, ’Shirts’, and he’s not. They’re not. The guitar riffs are down-stroked like square sound-waves. Chug-to-chug-to-palm-mute. When the guitar distortion is twisted up semi-tones in the chorus it’s as tasteful an invocation of the feeling of disorientation as can be created.

Each song on Adult is smashed into, torn apart and then scattered like feathers from a pillow. And there is nothing, nothing, better than hearing guitars being pummelled on a double down-stroke as a bass line tries frantically to keep up on sixteenths. What does that actually mean? Fuck knows. Probably nothing. But it sounds like something is deteriorating. It’s cathartic. ‘Cash Cow’ is this deterioration. ‘Cash Cow’ sounds like the Locust being elbow smashed from the top turnbuckle. MMA. Conditioning training. Pain.

Yes this hurts. But it can’t be turned off. Not when the third song is called ‘The Sadness Of Axl Rose’. Not when each word is indecipherable, except for something about “five more years” – perhaps a note of anticipation on the timeline before the next GnR album? It sounds like Billy cries in a breakdown, or maybe it’s the sound of disgust at himself? Disgust at onanism? It’s unhinged.

If there is a respite it’s ‘Dream Boat’, where guitar lines are drilled, for the most part, then they stop. There’s some kind of muttered talking going on in the background. The toms thud into cymbals. Then a two-note riff plays over and over while the bass slowly moves between its own four note repetition. And there’s noise. So much noise. Glorious noise. The kind you never want to end.

Their first album, BLCKLSTRS was a huge, sprawling, detonation, and so is Adult. This is even more of a monster. ‘Priss’ is a stuck riff, plenty of screaming, and a chorus of “I’m a sinking ship.” Several of their songs, if not most of them, are underpinned by one or two note guitar riffs. Yes. Just yes. Do not ignore this. Adult demands respect. If you don’t respect it, it will fuck you up.