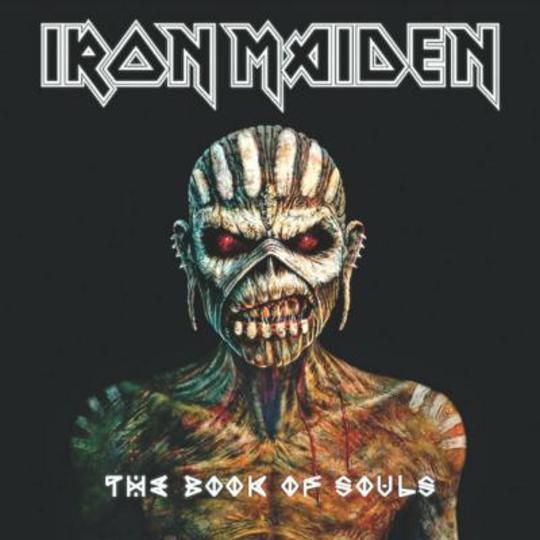 Julien is reading over my shoulder as I put together my review of Iron Maiden's first release in five years. He's referring to the Iron Maiden listening party we had last weekend. A gathering which quickly descended into a melee of controlled substances and what, at that point, we thought was highbrow conversation.

Really we were just recounting alcohol-soaked war stories of our relative youth, but if there's anything more in the spirit of Iron Maiden, I'm not sure I want to know what it is.

There are three things that unite this chaotic, disparate country:

Maybe it's a contemporary hangover from the Raj. Each of India's four metropoles speaks a different language, but put a random sample of city-dwelling teen to thirty year olds in a room and you can rest assured the Beast will bring them together.

It's this ubiquity that's made me a passive rather than active Iron Maiden listener. The same ubiquity that had me look up from my phone screen and ask Arjun 'Should I pitch for the new Iron Maiden record?' the moment the album mailer hit my inbox.

Arjun's a shining example of Maiden's power to transcend geographical and class boundaries. I'm curious to know they charmed a graphic-novel reading, private-school attending, LSE-graduating, technology-startup founder with the same ease as they do 18-year old parent-pleasing engineering college students, or 20-somethings liberal-arts majors pretending to make a difference by working in the non-profit sector (not unlike myself).

That's why I ask him to listen to the album with me.

'Let's do it,' he responds instantly.

'You realise it'll be you writing the review.'

'I'm not writing the review, I'm just getting stoned and listening to Book of Souls. The rest is your problem.'

It works for me, which is why I find myself at his place on a Friday evening. There are seven of us from four corners of the country sprawled around a table stacked with beer bottles, rolling papers, and, so far, empty ashtrays. Everyone - except for me - is a Maiden maniac.

'If Eternity Should Fall' is the first Iron Maiden song I have ever given my undivided attention. It's as grandiose as its name - and as any other track I’ve ever heard by them. I can't help remarking on how our speakers don't do it justice.

'It's meant for a stadium - thousands of people in the audience, lights, amps turned all the way up... There's no way we're getting the full Iron Maiden experience in this room.'

Arjun agrees and spends the next five minutes animatedly telling me about the transcendental experience that is an Iron Maiden concert.

'I don't see why they make albums at all,' I say once he's finished.

'This is a GREAT song!' Arjun says before 'Speed of Light' even starts. I perk up and listen to the track they dropped a month before ahead of the album release.

"_One way ticket no returns

My shooting stars are vastly burnt_".

My 'they're not known for their lyrics, are they?' face does not go down well.

I'm watching Dennis out of the corner of my eye. He's the closest I've ever got to seeing a ninja in the flesh. Dennis is from Manipur in the north-east of India and notoriously silent. He hasn't said a word during the evening, but he goes ballistic when 'The Red and the Black' comes on.

By 'ballistic' I mean I notice his foot tapping a little faster, and the hint of a smile on his face. To me, the track with its singalong 'whoa-oa oh-oh-oh's is an obvious crowd-pleaser but I know better than to say that out loud.

'What do you think of it, Dennis?' Arjun dares to ask.

'It's a good comeback for them,' he responds.

He doesn't say anything else for the rest of the night. I can only tell he's happy with what he's hearing by a glint in his eye.

'It's the guitars,' Arjun explains. While he's talking I can hear two of his friends 'singing along' to 'Man of Sorrows.' They're about to complete their final year at a high-end music school in Chennai. Right now, they're air-guitaring to 'Tears of a Clown', and calling out every change in chord as they go along.

'THAT,' he continues, as a ferocious guitar takes over the room, 'is an Iron Maiden solo.' The guitar soon gives way to another. He nods at me then, to indicate the self-explanatory nature of his words.

'Empire of the Clouds' is the first 18-minute track I have ever heard that is neither a post-rock thinkpiece nor composed in the 19th century. I'm stunned to notice how it's structured like a song off a prog rock concept album. It's a study in the dynamics of contrasts - orchestral strings against Eighties guitars, silence offsetting raging instrumentation, a change in tempo every minute, and a story to tie it all together. This is an Iron Maiden I did not expect to meet.

There's a moment of almost post-coital calm when we finish. I feel like I'm interrupting a moment of zen when I ask:

'What makes you love them so much?'

Despite the majesty of the final track, The Book of Souls is, to me, a timewarp; an album that wouldn't be out of place if it had come out 30 years ago. I understand it's the draw in Bruce Dickinson's voice, the magnetism of the guitar solos, and I've even come to understand the ethos within and around the band. But I don't understand why.

'They've just always been there, you know?' Arjun says. 'I grew up with Iron Maiden, I made friends because of them. You listen to a new Iron Maiden album and you know what you're going to hear. It's their sound.'

He takes a drag on his cigarette.