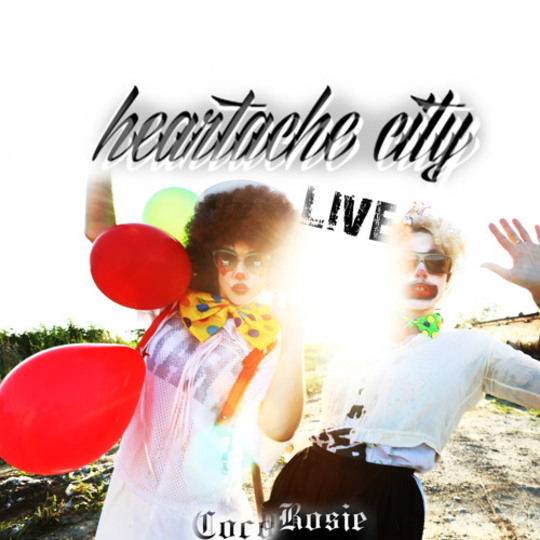 Whilst they have undoubtedly produced many a moment of weird beauty over the last decade or so, CocoRosie are rarely a cosy listening experience. Sisters Bianca and Sierra Casady have a history of tapping into the uncomfortable, taboo and offbeat, both musically and lyrically. Sixth album Heartache City continues the CR lineage of both beauty and discomfort. Whilst not as overtly provocative as some of CocoRosie’s early work, there is still a raw creeping darkness to the melodies. Even during its most beautiful glimmers the album is not a relaxing experience. But neither is it an unrewarding one.

The record begins with the sound of a wind-up music box on ‘Forget Me Not’. Spoken word vocals are laden over the top, sounding at first like nonsense rhymes, gradually gaining coherence, conjuring melancholic, naturalistic imagery (“Wounded stag/Limp your way to paradise”), building to a soulful song of loss. The lost howl of “If only I could remember you” is the repeated, weary refrain.

Following the music box, a smorgasbord of strange instruments and ethereal sounds run through the record. The psychedelic musical weirdness, eerie pop vocals and frequently recurring themes of loss and nature, create a southern gothic feel to the record.

There are moments when Heartache City has the ability to make hairs stand on end, such as the surprisingly earwormy chorus to ‘Lost Girls’. After spoken word rhyming, which is in danger of sounding a bit twee, the track comes into its own as the instrumental textures build and the gorgeous chorus is sung. Maybe the lines "stick out your thumb and lift up your skirt/someone’s gonna stop here soon" shouldn’t sound so beautiful, but they do.

‘Big and Black’ is the most disturbing song on the album, reminiscent of a demented ‘Unchained Melody’, with drunk-sounding vocals that nod towards Billie Holiday. It begins by building a picture of dead-end small town life: “white trash Sunday…telephone wires the way they go into the distance…the wicked tree branches…try to catch a dream passing by/like a cloud in the sky”. It ends in what sounds like a horribly matter-of-fact account of racism and murder, sung with child-like naivety.

‘Tower of Pisa’ is one of the rare ‘straightforward’ tracks of the album - it feels more clear what the track is about than most of the others. A pained account of maternal loss with the haunting, desperate refrain of “Excuse me mister, have you seen my daughter? I’m her only mother”.

Heartache City is a record perfectly surmised by its title, but I’ll try to expand. It’s the often uneasy, sometimes beautiful, sometimes disturbing sound of dreams and landscapes vividly conjured and then equally vividly crumbled to dust. At times the sheer weirdness and creepiness of the record can be a bit much, but that’s also what makes CocoRosie so great. There are diamonds in the roughness and a world to get lost in; your heart will ache before you leave.