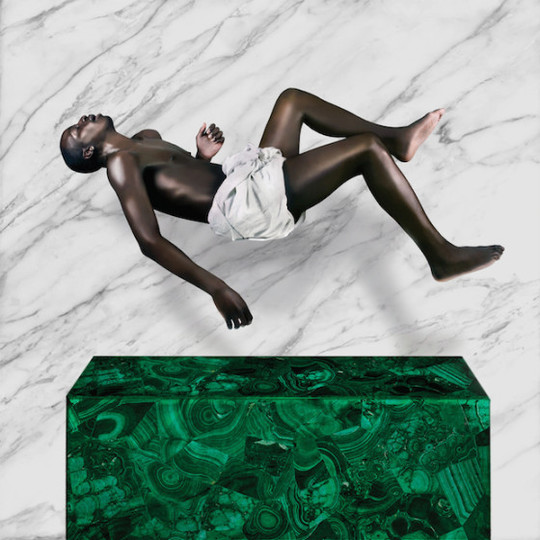 Yannick Ilunga has been searching for space.

Born in Brussels to Angolan and Congolese parents and now armed with a debut record written in Cape Town and recorded in London, it’s no wonder this is an artist for whom 'nowhere feels like home.'

Instead of hunting for the geographic though, as Petite Noir Ilunga has embraced that rootlessness and found home in a sound and ideology to call his own: noirwave, a defiant and deliberate attempt to challenge 'the way we’re trained to think that everything that’s white is forward-thinking'.

"I just really want to let you know what’s going down."

To approach your debut record with that mandate is a bold move to say the least, but it’s an approach that pays dividends across La Vie est Belle, because it draws a line under what he’s setting out to achieve that both focuses the mind, whilst leaving acres of fertile ground for imagination.

When you break it down, that noirwave self-definition isn’t about an attempt to craft a radically new sound: it’s about owning your place within the zeitgeist. The result is – in the best possible way – the most 2015-sounding of indie pop records.

What makes La Vie est Belle so vital is Ilunga’s songcraft, his flexibility and ability to push at the bounds of that recognisable framework. From the word go it’s on display: a lightness of touch with atmospheric sounds cultivating the tension-and-release of ‘Intro–Noirwave’, alternately tightening and loosening the screws of the dance-vibes of ‘Down’, the glorious, steadily-build of closer ‘Chess’, that starts like the itchy, subdued R&B of Kwes. and ends up feeling like a gloriously fresh peak-Silent Alarm-era Bloc Party cut.

Alongside this craft, there’s also the connoisseurship of Ilunga’s influences and references points. There are guitars that equally nod to both post-punk revival (‘Just Breathe’) and the South African blues of Philip Tabane (‘Colour’); beats that have the tinny clatter of DJ Mujava (‘Down’) and Congolese soukous syncopations (‘MDR’); a French-language rap here (‘La Vie Est Belle’) or darkly glistening touches of 4AD synth-pop (‘Seventeen’) there; weird clips of conversation and gigantic sing-along choruses. Each of these elements are deployed throughout with both fine-tuned balance and confidently at odds, summed up in the loud-quiet dynamic of ‘Best’: subdued verses on second and great stabs of brass the next.

It’s done with a sleight-of-hand that indicates not only Ilunga’s immense talent, but also that these seemingly disparate forces are simply the tools he has at his disposal. This is 'world music' in that it’s recognisably born of our globalised modern world, the pairing of a ferocious appetite for the new with the ability to do just that within a few mouse clicks: making the world smaller by revealing just how endlessly large it is.

“I’m just talking about change, everything wiped away"

From this situation, Ilunga is free to be inspired by and use everything that precedes and lies ahead of it, and so he thrives in the middle-ground between cohesion and conflict both sonically and thematically. In fact, that idea of synthesis is the common thread throughout. It’s in the gender fluidity of his alias, Petite Noir, a meeting of the grammatically male and female, and the pairing of ideas in the titles of his records - break-out EP The King of Anxiety indicating supremacy over negativity, his debut La Vie Est Belle / Life is Beautiful multi-lingual as a departure lounge. It’s there even his vocals: a sturdy baritone that can soar upwards into an airy falsetto, a range that lends itself expertly to the ‘he said / she said’ of ‘Chess’.

Most significantly, it’s definitely there in his politics. Ilunga has acknowledged the influence of his friend, mentor and collaborator Yasiin Bey (FKA Mos Def) in the formation of his politics, and on his debut record he picks up Bey’s 1999 clarion call from ‘Umi Says’: “Black people unite and let’s all get down” here.

This call for unity, simmers to the surface lyrically throughout - on ‘Change’, “we’re all just trying to grow / trying to get some change” and ‘Down’ “We’re not going down, you’re not going down” - but in a post-Ferguson 2015, the tone Ilunga consciously strikes is one of “finding positivity in dark times”.

Fundamentally, his most powerful political act is the most understated - himself as an artist. Owning a distinctive space within a 93 percent white UK music industry is significant, actively using that position to tell his own lived narrative - from the aforementioned world-wide network of variety in sound, through the authentic eye he brings to his depiction of life in Lubumbashi and dress in his music videos, to the naturalness and intimate detail with which he sings about his relationships - is powerful.

“Because you can’t run away that’s what I’m told / because we only sleep when we’re dead.”

As a debut record, La Vie Est Belle / Life is Beautiful is bold, beautiful and brilliantly honed. As a statement for an ‘African New Wave’ from an artist who wants to bring people together to break boundaries, it’s even more so.