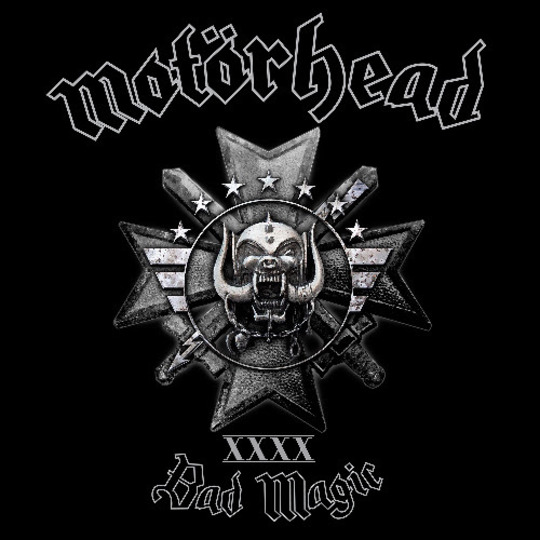 It seems appropriate that Motörhead will soon be embarking on a fortieth anniversary tour with The Fall. Both are seemingly immortal British music institutions, who churn out decent quality albums regardless of what level of public acclaim they’re currently enjoying (Bad Magic is Motörhead’s 22nd studio album, The Fall have just hit 27) and both are, of course, led by great, charismatic frontmen. For all that, though, the two have taken rather different musical paths. Not for Motörhead The Fall’s countercultural post-punk weirdness and anger, instead their aim is a simple and familiar one - to rock louder and harder than anyone else, a goal they’ve given a damn good attempt over the past 40 years.

Motörhead also have either the good fortune or the terrible luck, whichever way you look at it, of having one of the biggest musical albatrosses around their neck of any band: obviously it got them a lot of attention but at the cost of overshadowing all of the other good work they’ve done. I doubt anything on Bad Magic will receive the same kind of interest as That Song I’m Not Going To Mention, but there’s still a whole bunch to enjoy here. What you have to realise is that Motörhead are one of those bands that are content to basically make the same album every couple of years. John Peel famously said of The Fall that they were 'always different, always the same': well, Motörhead are just always the same. Like AC/DC or Iron Maiden or Slayer they know what they like to do it and they do it well and, like those other bands, we allow it because they rock so goddamn hard.

If you didn’t realise what you were getting in for, opening duo 'Victory or Die' and 'Thunder & Lightning' are a pretty good baptism of Motörhead. There’s nothing fancy going on here at all, just good, solid riffs and wailing guitar solos. If you like what you hear in those opening two songs then you’ll almost certainly like both the rest of Bad Magic and also everything else Motörhead have ever recorded: one thing you couldn’t accuse the band of is having too many ideas. But, as I say, there are some interesting touches along the way, such as the Brian May guest solo on 'The Devil' or the impressive drum intro to 'Shoot Out All of Your Lights', reminiscent of 'Overkill', the actual best Motörhead song, as any true fan should know.

What’s most rewarding about the listening to the album the whole way through, though, is how on form old 'Lemmy' Kilmister is. While never the most expressive of vocalists, he brings an extra-growly approach (possibly afforded to him by years of hedonism) to 'Evil Eye' and 'Choking On Your Screams'. In the latter’s case a crushing riff that bears some similarity to Killing Joke’s 'Pssyche' helps make it the most satisfyingly heavy thing on the album. Lemmy’s skills as a bassist tend to get overlooked a bit but in this regard he is, again, on top form here: pay attention to the bass run at the start of 'Teach Them How To Bleed' or note how the bass more or less takes the lead on 'Tell Me Who To Kill'.

But it’s interesting that the two best tracks on Bad Magic are the two biggest surprises. “Till The End” is, by Motörhead’s standard, a fairly tender ballad, this album’s equivalent of 'Lost Woman Blues' from 2013’s Aftershock. In it, Lemmy reflects on getting older and perhaps facing his mortality, even if, for him, that just means switching from whiskey to vodka. Then there’s the finale, a cover of The Rolling Stones’ 'Sympathy for the Devil' - perhaps a surprise choice but the band pull off a dirtier, grittier take on the song, with Lemmy perfectly believable as a gruff, hard-partying Lucifer.

All in all, there’s not much here that’s likely to blow your mind; if you’re already a Motörhead fan then you know exactly what you’re getting yourself in for, and even the most die-hard may find themselves wanting to skip a track or two, but there’s always something impressive about a band so dedicated and single-minded about fulfilling the simple goal of being the best rock band on the planet. I’m not sure if Motörhead are that band, but they do embody whatever it is that can be so transformative about rock and roll music.