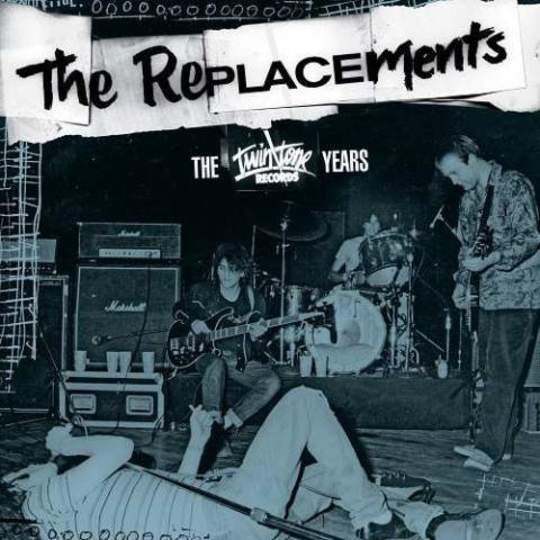 Heroes aren't born, they're made. Spider-Man was bitten by a radioactive arachnoid, Batman saw his parents’ murder and The Replacements inhaled copious amounts of cocaine, speed and alcohol.

As rock'n'roll's patron saints of fuck ups, this Minneapolis-born quartet are almost as famous for their hellraising as they are for their LPs. They released several albums without signing an actual record deal, sabotaged a support tour with R.E.M. by playing abrasive sets full of covers and had a drummer with a drunken alter-ego called 'Pappy the clown'.

Despite this long-standing lust for chaos, The Replacements managed to pen an all-time classic in Let It Be. The Twin/Tone Years vinyl boxset tells how a band of hardcore wannabes became some of music's most celebrated misfits. If you're already a fan of Paul Westerberg's gang then you'll know these songs have been out of print for some time. If not, then settle in for one hell of an origin story.

Act 1: Sorry Ma, I Forgot To Take Out The Trash

When they started out in 1978, The Replacements really had no idea what they were doing. Their bassist, Tommy Stinson, was only 11 years old, Westerberg knew about three guitar chords and they all got far too wasted far too often. They were unapologetically shambolic and totally uninterested in either tying themselves to a scene or ponying up for a careerist shot at the big time.

Two factors influenced their obnoxious, breakneck sound: Hüsker Dü were the biggest local band around and amphetamines were going cheap. And so a hardcore quartet was born, despite the fact that The 'Mats were never really committed to the genre. They were far too influenced by Slade and The Faces for that to happen.

While Sorry Ma... is an undeniable shambles, it's also great fun and an important cornerstone of the band's personality. At their first show for 22 years at Toronto Riot Fest in 2012, The Replacements opened the set on 'Takin A Ride'. Not the college radio anthemics of 'Alex Chilton' or a slowburn ballad like 'Here Comes A Regular', but a breakneck ode to getting trashed and dragging your car around town.

Even in their latter years, Westerberg and co never lost this destructive aimlessness. Given the opportunity, they’d always kick back at what was expected of them. Never mind if that meant selling themselves short.

The noteworthy songs on Sorry Ma... come when cracks in this demeanour show up. ‘I Hate Music’, ‘Hangin’ Downtown’ and ‘Shutup’ are all fine slabs of bratty punk. Compared to the righteous fuzz of Zen Arcade or the Circle Jerks’ anarchic grot, these tracks lack identity. There’s more to the people who made them than they’re willing to let on.

‘Johnny’s Gonna Die’ is a poignant ode to Johnny Thunders’ struggles with heroin, “Johnny always needs more than he takes/Forgets a couple of chords, forgets a couple of breaks”, while ‘Kick Your Door Down’ breaks the three minute running time barrier by virtue of a jarring (three note) lead guitar riff. Best of all is ‘I’m In Trouble’, an effervescent confession of romantic fecklessness that still rings true for all teenagers of drinking age. Eventually, The Replacements would make this emotion their calling card on Let It Be. Before then they flirted some more with reckless abandon.

By the close of 1983, The Replacements were one of America’s most celebrated alt-rock bands. Hootenanny featured in whole host of critics’ year-end top ten lists, while over 200 radio stations played songs off the album. Westerberg’s four-piece were one leap away from greatness, which isn’t something you would have figured them for as little as a year earlier.

Aside from its incendiary lead track, ‘Kids Don’t Follow’, the Stink EP is a prime example of between album filler played out in snot-nosed fashion. Songs like ‘Fuck School’ and ‘God Damn Job’ are try-hard to the point of cliché, swinging for easy targets that they just about stroke on the chin.

In playing up their oikish qualities to the point of parody, The ‘Mats rendered themselves indistinct. A shortcoming the band themselves quickly came around to when playing down the record in interviews. “That was maybe the beginning of thinking, ‘Aw, I don’t know if we fit into this,’” said drummer Chris Mars.

When recording Stink, Westerberg had been slammed for attempting to sneak an acoustic torch song onto its tracklisting. As it turned out, the lovelorn swoon of ‘You’re Getting Married’ would have far more in common with Let It Be than anything else from those sessions. Eventually released decades later, the song sees Westerberg croon in clunky sincerity, “You're like a guitar in the hands of a man that just can't play”, to a beau who wasn't his and never would be.

While this newfound sense of direction gave the The Mats a purpose on Hootenanny, it certainly didn’t convince them to hit the straight and narrow - not least on the album’s opening track. A barely tuneful blues-rock shuffle, it saw Mars and Westerberg swap instruments and lark about simply to piss off their producer Chris Stark. When Stark took the bait, the band insisted, 'First song, side one.'

From ‘Take Me Down To the Hospital’ to ‘Mr Whirly’, this kind of of boneheaded gaiety is scattered all over Hootenanny. You might blame it on the booze, but that kind of lubrication had been in high supply for some time already. No, The Replacements were finally figuring out what kind of band they wanted to be, which makes for an endearingly scatty listen. A significant chunk of the record features half-formed ideas, the instrumental ‘Buck Hill’ was later reworked into ‘On The Bus’, or crass skits in the vein of ‘Lovelines’, “Fantasy Phone Swingers' Hotline/Pure silk, pure seduction/G-strings in petal pink hell.”

What’s left over sees Westerberg reach some degree of emotional maturity. 'Color Me Impressed' is a whip-smart affirmation of his outsider status, mixing deadpan witticisms with razor-sharp riffing. 'Within Your Reach' whispers sweet nothings via synths and a drum machine, and 'Take Me Down To the Hospital' showed his old, roguish habits were still very much in place.

"We're getting no place fast as we can," Westerberg laments on 'Treatment Bound'. Who knows whether this was misdirection, wishful thinking or simply how he felt at the time. Whatever the case, Hootenanny represented a new beginning for The Replacements. One where for the first time ever, they were willing to snatch triumph from the jaws of catastrophe.

There's a trope in superhero movies where their grand finale has to be bigger, louder and even more explosive than what came before. Usually with some sort of aerial attack on a city.

In the years before Let It Be The Replacements had already proved themselves more than capable of self-combustion. The challenge was to keep this trait in check on their last studio album to be released independently. Not long after the LP hit stores, guitarist Bob Stinson and the band's manager Peter Jesperson would be (somewhat unjustly) fired for excessive alcohol consumption. Westerberg would also address the crowd at a catastrophic major label showcase at New York's CBGB saying, 'Do we get a record contract now?'

This appetite for self-sabotage is barely suppressed on Let It Be. You can feel the grizzled seams of 'Favorite Thing' and 'Answering Machine' creak under the weight of repressed adolescence. They show a band struggling to express themselves without reverting to type via a churlish rat-a-tat-tat of fuzz. Ultimately, this is what makes the album so compelling. Rarely has salvation sounded so unsure of itself.

Granted, there are times on the record when The Replacements have to cut loose. 'Tommy Gets His Tonsils Out' is a vicious recollection of a trip to the dentist and 'Jimmy's Got Boner' describes... well, you can imagine. These moments of chortling farce are balanced out by perhaps the most personal songs Westerberg has ever written.

'Unsatisfied' is a naked statement of disillusionment with a soaring guitar line that hits like a sucker punch to the gut. Better still is 'Androgynous'; in fact, it's The 'Mats' finest moment. "Here comes Dick, he's wearing a skirt/Here comes Jane, you know she's sportin' a chain," howls Westerberg over dive bar piano. Here was a rock band saying, 'All outcasts are welcome.'

If you have to distil The Replacements' influence on a litany of modern day musicians, including the disparate likes of Miley Cyrus, The Cribs and The Hold Steady, it's that they showed rock doesn't have be macho. Hell, it can be whatever you want - especially if someone else reckons otherwise.

Over the course of The Twin/Tone Years, you can hear a band transform from rebels without a cause to rebels with at least some semblance of a clue. Completists will rightly bemoan the exclusion of 1985's skatty Shit Hits The Fans live record from the box set. For the purpose of this story, Let It Be is a worthy endpoint.

The underdogs did good and carved out their own roguish place in history. If that's what you care about, y'know. Whatever.