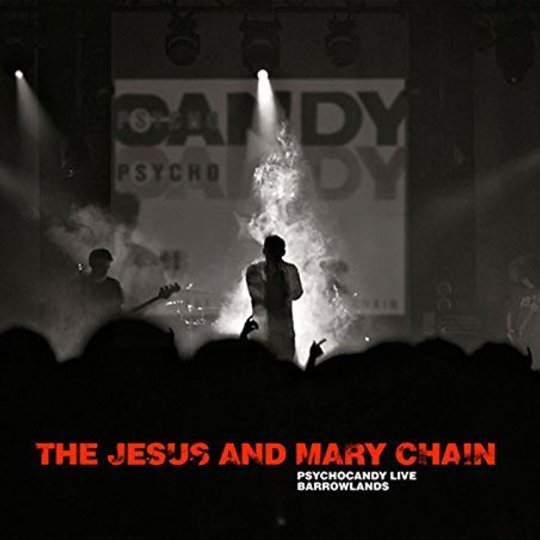 Of all the bands who've returned in recent years to perform their critically acclaimed 'seminal' album, The Jesus & Mary Chain's decision to tour Psychocandy was probably the most well received. Released 30 years ago amidst a musical backdrop still under the spell of Live Aid, its devastating effect has caused severe ripples ever since, changing the face of guitar music in the process. Cited by many artists as their raison d'être, Psychocandy's status as a bonafide game changer remains.

Having been on the road since the latter part of 2014, Live At Barrowlands chronicles one of the first shows from the tour. Recorded in November of last year, it finds the five-piece in exhilarating form throughout. Anyone not familiar with the Psychocandy tour might find the format a little topsy turvy, with the band opting to play a greatest hits style encore comprising seven of their best known songs to start with before leaving the stage for a short break then returning to run through the album chronologically. While the element of surprise is somewhat lost - as is with most 'full album' performances - the facility to compare and contrast the band's material both pre and post Psychocandy makes for an interesting aside.

While only the Reid brothers Jim and William remain from the line-up that made the record, Live At Barrowlands provides a timely documentation of why this band were so highly revered both then and now. When Jim Reid sings, "The way I feel tonight, I could die and I wouldn't mind" on 'Head On', the second song in the set, one suspects he probably wouldn't mind from an accomplishment point of view anyway. Revitalised and re-energized, all 21 songs are performed with a zest and vigour many of their contemporaries would indeed kill for. William Reid's teasing 'I Wanna Be Your Dog' segment ignites 'Reverence' before a blistering run through debut 45 'Upside Down' brings the opening set to a close. The rarely played 'Psychocandy' and early demo 'Up Too High' sound fully formed here, and while the exclusion fan favourites 'Happy When It Rains' or 'Blues From A Gun' has been discussed to death since the tour began, these recordings justify the aforementioned's inclusion.

Playing Psychocandy in running order doesn't pose too many problems. Rose McDowall, formerly of Strawberry Switchblade provides the customary backing vocals on 'Just Like Honey', while the elder sibling William's razorsharp guitar adds an extra level to brutality to the forcefulness already apparent on the likes of 'The Living End', 'Taste The Floor' and 'In A Hole'. What is quite startling is the way engineer Noel Summerville has captured some equally mesmeric noise departures on the formerly placid 'My Little Underground' and 'The Hardest Walk'. If anything, giving each an added touch of menace and vitality in the process. A squalling 'Never Understand' threatens to destroy the Barrowlands PA until Jim Reid shouts a desultory "STOP!"during the elongated outro while closer 'It's So Hard' threatens to veer off disdainfully by proxy.

More importantly, is Live At Barrowlands a worthwhile purchase for anyone other than Jesus & Mary Chain obsessives? Well, yes and no really. As an accompaniment to the original album - which I'm sure most people reading this will already own (and if you don't, you should) - it stands proud as a comprehensive update to a timeless record. Revealing in its delivery and pulsating in its execution. For those with an extra few quid to spare (£60 to be precise), it comes as a neatly packaged box set that includes a hardback book containing unseen photography and recorded interviews with the Reid brothers and manager Alan McGee along with limited edition vinyl artefacts of varying description.

What isn't open to debate is whether The Jesus & Mary Chain are still relevant today. Indeed, that goes without saying. Three decades have passed and no album has made anything like the same uncompromising impact since.