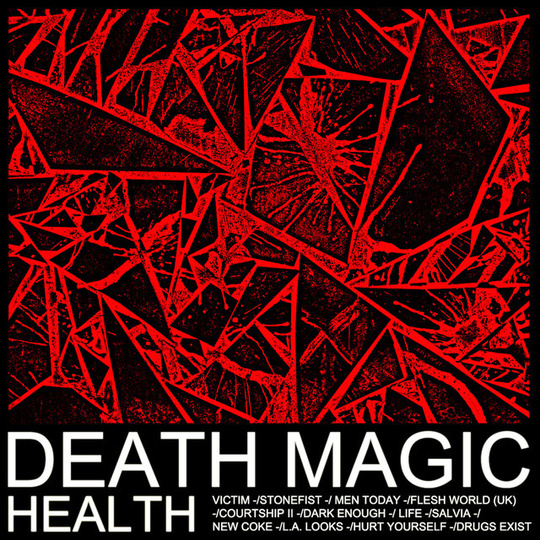 There was a fabulous moment sometime around 2008 when indie/alternative/whatever music appeared to be so stratospherically popular that it actually looked like we might actually see a noise band – albeit a fairly accessible one – hit the charts. Crystal Castles seemed the most likely candidates; if not them, surely their sometime remix buddies HEALTH: abrasive as the LA quartet could be, there was something underlyingly fun about their glittering, hyperactive sound, which they were always willing to mould into something more nakedly enjoyable via their two fine Disco remix albums.

Then the bottom fell out of indie/alternative/whatever, and the idea of U2 cracking the top 40 again seems unlikely, let alone scraggy Americans making jarring music that will never be played on daytime radio anywhere, ever. Perculiarly, however, HEALTH went on to gargantuan success anyway, with their next record shifting four million units... if you consider the follow up to 2009’s second album Get Color to have been the enormously successful computer game Max Payne 3, for which they did the soundtrack. Ironically their most successful set of music is prably also the least well-known amongst their own fans. But a cursory listen to Max Payne 3’s dancier textures does offer some sort of missing link between the HEALTH of 2009 and that of 2015.

Death Magic is an unexpected record, conspiring to reinvent the band’s sound without technically doing anything they hadn't done before. There's not a simple way of expressing what's changed: the production – courtesy of The Haxan Cloak – is smoother, for sure, and in that smoothness the music touches upon more commercial strains of music, notably chillwave, electropop, and even EDM (srsly). But it still sounds like HEALTH – it's easier to be left with an impression that it's commercial than to see that born out by the reality; it is still dissonant and hyperactive, and its hooks etc are not far away from glittering moments of synthy melody they always daubed their music with.

The biggest tangible change is the rise in prominence of singer Jacob Duzsik: time was his numb, treated vocals were sparsely deployed and borderline incomprehensible, an eerie counterpoint to the frenetic music. Now they're (often) front and centre and it's all a bit strange – rather than sound like eerie hissing from beyond the grave, he sounds kind of croony and soft and even maybe a bit boyband-y. There are a couple of more structured songs – 'Stonefist', 'Dark Enough' – where HEALTH end up sounding quite a lot like Depeche Mode, in the imperious bombast of their beats and synths, their willingness to sound coldly enormous (and at a stretch Duzsik’s vocals perhaps have a little of the Martin Gore to them).

You'd be hard pressed to really say HEALTH now sound like Depeche Mode generally, especially on Death Magic's more ferocious moments, or its more out and out clubby ones, but there's something in the record's strangely sloshing cocktail of light and dark that recalls the Basildon boys' transition from wide-eyed pop to maleveolent electro-rock. The difference being that HEALTH seem to be going the other way, edging into the light while holding on to some of their old savagery.

It’s always a cop out when writers describe a record as ‘transitional’ (because how the fuck do they know), but there is the air of HEALTH now being at a cross roads. Their rampaging style of yore feels a little constrained and tamed by the booming production and ‘nice’ singing, but at the same time they are beginning to write some pretty stupendous ‘proper’ songs. Any which way, they’re a truly singular band: nobody else has had the career they’ve had, and nobody else sounds quite like them. Whatever they choose to do with their gifts, it’ll be interesting.