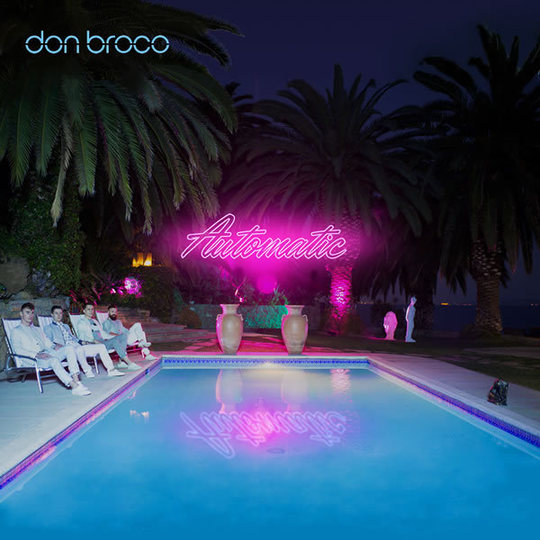 It’s been a long wait for Don Broco to release their second album after since 2012’s <i<Priorities. The band rocketed fairly quickly to become one of the more popular UK acts to emerge from alternative guitar music of the last few years. They quickly built a reputation for catchy rock, the sort that they’ll play at nightclubs after Blink-182 as your feet stick to the floor.

The problem for this is that it’s the sort of genre that can be formulaic quite easily. Acts like All Time Low and You Me At Six litter the alternative rock wasteland and while they enjoy varying degrees of success, I find them no more original than some of the pop acts that might generate such scorn from their fans. The presence of guitars does not make something any easier to swallow.

So innovation was needed for Automatic, their so-called difficult second album. And while they have certainly deviated a fair amount from their original sound here, that doesn’t mean they’re offering anything fresh. This is an album that aims for the bigger venues. Don Broco have set their sets on the arenas like so many bands before them.

The band themselves have acknowledged not only a desire to change their output a little but also to stand out from the crowd. An opening salvo should be mega important when it comes to getting that impression across. On opener ‘Superlove’ at least, the synths make an opening statement that they’re going to try and do that. They’ve definitely taken things down a significant notch in terms of how heavy their tracks are. That feels like a risk as it could alienate a portion of their fanbase.

From there though, there’s little to distinguish this album as a band trying to leave their past behind them. Track after track passes by with fun choruses and a polished sound that you feel might not be enough to snare new fans but will possibly alienate a portion of their-Kerrang reading fanbase.

‘I Got Sick’ sticks out glaringly. It’s all stadium drums and vaguely familiar guitar riffs. The lyrics are actually more than a little creepy. The "My heart beats for the thrill of watching you. Where you’ve been, what you’ve had to eat, I’m always watching you" pre-chorus line is the sort of thing that it was just about okay to say when ‘Every Breath You Take’ was released but society has sort of singled out as being basically inappropriate by this point. The slight saving grace is that they admit on the song that it’s a little sick.

The genre switch flicks for the funky ‘Keep On Pushing’ with its motivational grow-up lyrics. ‘Tough On You’ then has electric percussion and finger clicks to take you through to a chorus which is a strong moment for them but, again, nothing you haven’t heard before. At least the closing track ‘Further’ does the whole closing-track-at-a-huge gig thing properly. It has a "light up the dark" lyric and a key change and everything.

So here’s the thing, when a band changes direction it can be a wonderful thing. When Radiohead changed direction it eventually brought us classics such as Kid A and In Rainbows and made sure they never became stale even if it alienated some of their fans.

So while Don Broco’s desire not to retread old ground is commendable, their stated desire to focus on what makes them stand out as a rock band has fallen a little flat. They’ve changed a little here and there but mostly they succeed only in diluting their own product, buffing and sanding the edges to make a peg that will slot perfectly to festivals and – if they’re really lucky – arenas. Whether they achieve that goal and earn themselves new fans remains to be seen but Automatic feels like a step back for a band that was never making huge leaps to begin with.