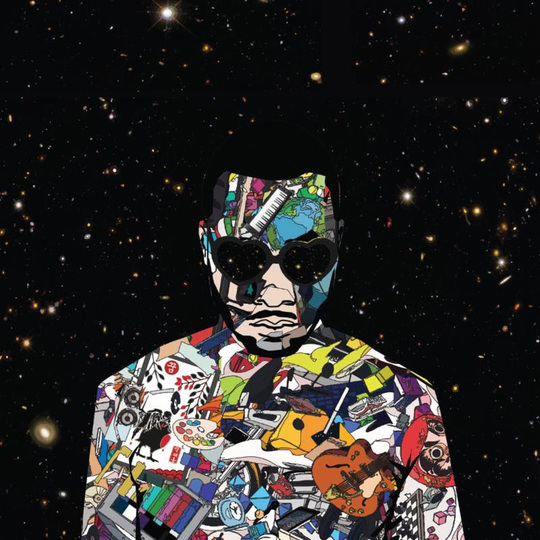 Ninja Tune really is on a fine run of form at the moment. The label seems to have gone in to overdrive, cherry-picking the best of the best of electronic releases which have just enough approachability about them to ‘crossover’ but have plenty about them to appeal to listeners who would think that the very idea of such a crossover would be a terrible thing. Here with Universes, the debut album from Seven Davis Jr, we have another such hit in what is turning out to be a fantastic year.

Universes is no one trick pony. Certainly we’re being lied to when slinky opener ‘Imagination’ claims that “it’s nothing, whatever you want it to be”. A veritable smorgasboard of styles, from the percussive, synth and organ driven ‘Freedom’ to the downright funky ‘Sunday Morning’ with its probing “Bet you never had a love like this before” lyric, this is one versatile album. Taking funk, soul and electro elements and updating them is a fairly common trick these days, but to do so with such panache and individuality is a rare gift. This is futuristic neo-funk of the best kind. Seven Davis Jr carves out, potentially, a whole new corner for himself in the crowded genre along the way, giving notice of a huge potential in the process.

On ‘Everybody Too Cool’, the thumping drums, and playful bass and organs underpin a vocal reminiscent of the best of Dave Okumu of labelmates The Invisible. ‘Good Vibes’, featuring the album’s first guest vocalist Julio Bashmore, takes things in a decidedly dancefloor direction, while ‘Be a Man’ introduces fLako with a light, summery vibe and another strong chorus.

Other reviews have noted ‘Fighter’ to be a mis-step. Alternatively, it could be seen for what it is, the centerpiece of the album. Over a rolling, offbeat rhythm, Seven asks “Do they know what they’re fighting for anymore… do they even care what they’re killing for anymore?” It feels like an important moment, a brief pause in the midst of joyous summery vibes. Particularly apt at this time with so many news stories of senseless injustice in the news, Seven Davis Jr does a fine job of asking a pointedly questioning song. It is no hackneyed protest tune. It’s not an opportunistic bandwagon-jump either. It feels like a raw, honest expression emotion when he asks “Do they even know they’re killing themselves? Do they know this is suicide?” Yes, it is musically out of step with the rest of the album, but the record as a whole would be very much the poorer without it.

As the regular interludes throughout the album assert, Seven Davis Jr seems to want to give the impression that he’s visiting from another planet, come to explore, to ask questions, to show the way with a new fusion of musical styles. While Universes never quite reaches the heights that might be sought by this confident-sounding producer, there can be no denying that this is one of 2015’s boldest electronic releases, and that it deserves to be one of its foremost too.