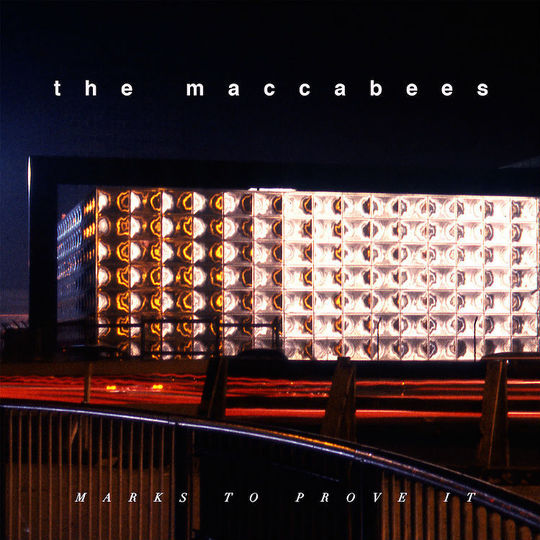 Almost a decade ago, fresh of face and rambunctious of spirit, The Maccabees burst onto the UK indie scene with ‘Latchmere’, a barnstorming post-punk ode to the charms of a South West London swimming pool and its wave machine. Fast forward nine-and-a-bit years and the quintet are still inspired by life in the big city, but have shifted three miles east in search of inspiration, from leafy Battersea to brutalist Elephant and Castle. Marks to Prove It, like its decade-removed predecessor, is unmistakably the sound of urban life, but unlike their debut the aperture is now thrown fully open.

The intervening years have seen Orlando Weeks and company morph from student night-soundtrack to critically lauded, Mercury-nominated rock outfit, and yet on first hearing, Marks to Prove It is the sound of a band in part come full circle. Given to the Wild, from 2012, saw the Maccabees skyscraping in both atmosphere and ambition, but on the title track which opens their new album, they revel in the indie scamp charms of yore. The touch-paper is lit on proceedings with aplomb, the song all clunking power chords and angular lead guitar before collapsing into a rollicking and swaggering bridge. Underneath its thundering instrumental drive however, it’s a hazily-hidden introspective affair: "Over the summer, a lot changed / and they all changed to keep up with it / Too complicated / Too complex to talk to anybody", intones frontman Weeks’ confessional baritone before the track leaps into its straight-into-the-bloodstream chorus.

‘Kamakura’ sees the band properly pick up where they left off on Given to the Wild – shuddering bass and tickled guitar atmospherics evoking the menace and exhaustion of 3am nightbus rides around their home neighbourhood. Just like the streets that inspire it, Marks to Prove It is an album where threat and violence sit ever on the edge of things, occasionally coming to the fore. ‘Ribbon Road’ and ‘River Song’ are two such tracks – the former a sashaying and headspinning tumult that’ll have your molars chattering, such is its wonderfully-crafted tension; the latter possibly the finest cut of them all, featuring a deranged and diabolical saxophone line, the instrument blown within microtone of shattering as it soars over quasi-military percussion. When Weeks stares into the abyss and bellows "You’re not getting any younger / Soldier on for another year/ Truth is we’ve all done the same" you’d better believe it. The time for Toothpaste Kisses and and First Loves is well and truly over, consigned firmly to the past.

With Marks to Prove It, The Maccabees have created a record of gritty intimacy. While there are moments of astonishing beauty (the sizzling brass and ethereal vocals of ‘Dawn Chorus’ is one of many examples), true intimacy means getting close to something, often in spite of its flaws. In Elephant and Castle, The Maccabees have both found perfect foil and delivered. The Latchmere may have a wave machine, but The Elephant offers all the ingredients for a potentially career-defining album.