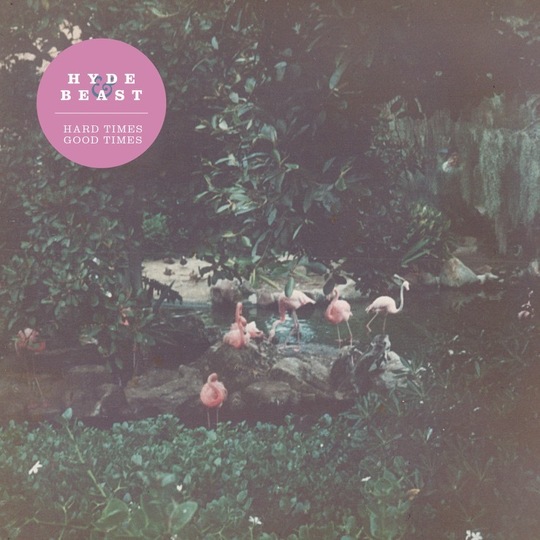 Last August, David Hyde and Neil Bassett – aka Hyde & Beast – released second album Keep Moving, a slice of Sixties psychedelia, Seventies glam rock/folk country and charming pop sensibilities. It was unexpected, and like most unexpected things, totally refreshing. They have now returned with a new EP Hard Times Good Times. Does the title reference the slightly dour atmosphere that's recently permeated Hyde and Bassett’s private lives (break ups and bereavements) during the Keep Moving sessions? We can only speculate, but possibly.

Title track 'Hard Times Good Times' starts things with a catchy, fuzzed-out guitar riff and giddy blast of horns that demands to be played as loud as possible, and threatens to go on forever. “Hard times, hard times I’m just trying to make you hear me. Hard Times, Hard times when you look you don’t even see me”. However, after an exquisite slowed down instrumental section it's juxtaposed with the refrain “_Good times, good times now you are walking by my side, good times, good times my feelings for you I don’t hide” are sung. So maybe things, like the weather, are picking up?

'Everything You Want' sounds like Chas and Dave after they’ve been reading a shed load of Albert Camus and decided to write a break up song. “I tidied up and I tidied out. I never thought about the things I didn’t think about. I chased you up and you chased me out. You never thought about the things you didn’t think about”, but, you know, not quite as Rockney. 'Never Get to Heaven' has a Mungo Jerry-'In the Summertime' vibe to it. Catchy, but slightly melancholic. Bouncy jaunty guitars coupled with a flute solo makes 'Never to Heaven' a content for song of the summer. 'Get Up' feels like a reworking of T-Rex’s 'Pewter Suitor' but with even more plinky guitars, if that is possible.

Despite the jaunty vibes, heartache isn’t ever too far away for this duo. This is the crux of their music, they pick you up with incredible melodies and harmonies whilst bringing you down with heart breaking lyrics, that someone how make you smile. If there is an EP that embodies the summer this is it. It’s the musical equivalent of an unrequited summer holiday crush by the sea. You spend your time making your move, but ultimately the feelings are not returned. You feel sad but the next day you’re fine as the sun is out, the sea is blue and see someone else who takes your fancy. Plus there are flamingos on the cover. What more could you want?