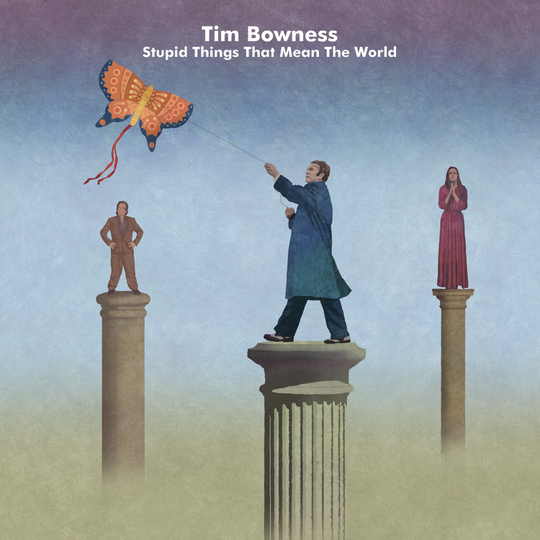 Tim Bowness will forever be best known for No-Man, his long-running – but now sadly dormant – collaboration with prog superstar Steven Wilson. Having said that, Stupid Things That Mean the World, which follows up last year’s Abandoned Dancehall Dreams, demonstrates clearly and concisely that Bowness has more than enough songwriting nous to produce excellent records without his long-term collaborator.

Opener ‘The Great Electric Teenage Dream’ feels, more than anything else on the album, like a direct continuation of Abandoned Dancehall Dreams, retaining as it does the vaguely claustrophobic feel of that album’s opener, ‘The Warm Up Man Forever’. Moving swiftly from its vaguely ominous opening, it soon provides a pleasing early rush of intensity, with Bowness seemingly railing against the death of the musicianship dream, pointed references to the digitisation of music included. It’s followed by two extremely pretty, slightly fragile tracks in the shape of an old No-Man excerpt, ‘Sing to Me’, and ‘Where You’ve Always Been’, both of which reference an old English folk tradition with their acoustic guitars and pastoral melodies.

The title track, meanwhile, hints at mid-period, Wild Opera-era No-Man, with its funky bass line and choppy guitar parts being a world away from the minimal, gentle folk feel of the previous two tracks. What’s particularly impressive by this point, four tracks in, is that Bowness is determined to keep making his solo albums reasonably diverse, rather than reining things in to a predictable pattern. This is further emphasised by the excellent ‘Know That You Were Loved’, with its wonderful balance of hazy nostalgia and poignant reflection, and ‘Press Reset’, which, paradoxically sounding both oddly contemporary and strangely familiar, might be the closest thing Bowness has recorded to a modern alt-rock song.

It’s a shame not to see more made of two very short tracks near the album’s end. The captivating little instrumental ‘Everything But You’, uses flute, violin and voice to make quite the impression over its brief (just over one minute) duration. It would have been interesting to see where this brief snippet of an idea might have led, hinting as it does at something distinct from previous Bowness penned epics like the last record’s ‘I Fought Against the South’. ‘Soft William’, meanwhile, is a short piano-led piece that feels like it could have been expanded along the lines of something like ‘Smiler at 50’ from Abandoned Dancehall Dreams. The extreme brevity of these two very promising tracks, which are the penultimate pair on an album lacking in lengthy songs, unfortunately contributes to the second half of the record losing some of the potency of the first.

The only real flaw of Stupid Things That Mean the World, then, is that it’s perhaps just a touch too slight. Abandoned Dancehall Dreams did a fine job of demonstrating that No-Man’s loudest and most experimental moments often came from Bowness as much as they did from Wilson. This side of Bowness’s musical personality is, as already illustrated, by no means absent from Stupid Things That Mean the World, but the more restrained, and slightly less expansive feel, of some of the tracks here perhaps makes the record as a whole feel slightly undercooked in comparison to its predecessor. Nevertheless it is another fine entry into the enviable discography of one of the most sadly underrated of British songwriters.