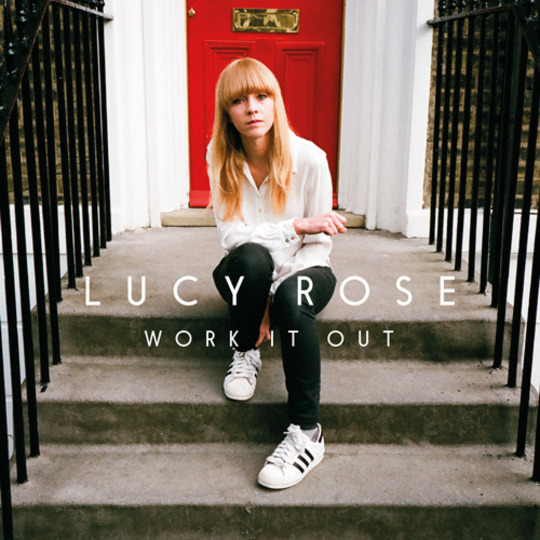 The video for Lucy Rose’s recent single, ‘Our Eyes’, is genuinely brilliant. Rose wears a series of suits covered in dog biscuits and sausages, then grass, then chips. The camera catches her delighted hysterics as she’s gently mauled by hounds, tiny horses and seagulls, chased by animals around fields and circled by fake shark-fins in the sea. It’s witty, playful, unselfconscious and captures the sparkle that first got her noticed. Sadly this makes it almost the complete opposite of her latest album.

It’s not that Work It Out is unaccomplished - it’s a well-crafted record, beautifully performed by Rose who plays most of the instruments herself. Her voice is always wonderful; dextrous and emotive without ever being overwrought. She’s clearly got bags of talent, confirming the potential glimmering on her debut album and the evocative backing vocals she added to the Manic Street Preachers’ ‘Sullen Welsh Heart’ a few years ago, not to mention the role her voice has played in developing Bombay Bicycle Club’s sound.

But none of that obvious talent can make up for how frustratingly boring her second album is. Rose apparently battled hard against record company pressure to bring in co-writers and session players, insisting on writing it herself and making the record she wanted to make; so it’s heartbreaking to find that Work It Out has the feel of an over-worked album tooled for mainstream success by committee - exactly what she was trying to avoid. There’s a handful of likeable folk songs here but they’re compromised by weak beats and Radio 1-bait hooks that render them frustratingly charmless. Opener ‘For You’ is a textbook example: it begins with real elegance and could succeed on Rose’s lovely delivery alone, then rubbish third-hand afrobeat drums kick in and transform a chorus that was charming you two minutes ago, into a sub Bombays cast-off. It’s doing the songs a disservice.

It’s as if the likes of ‘Like an Arrow’ and ‘Til The End’ are following some kind of template for vaguely dancey, indie-light chart-pop, constructed for maximum advert-soundtrack-potential. These are songs plenty of people will 'not mind', they certainly won’t offend anyone, but it’s hard to imagine anyone actually loving them and if no-one loves your music, if all you’re pasting onto culture is folk-flavoured wallpaper, then really, what’s the point? Something like ‘Köln’ could have been released by about a hundred other artists over the last half decade, most recently by Years & Years, a band so flavourless and invisible they’re practically cling-film. That’s not something to aspire to.

It’s not all bad news - ‘Nebraska’ is sad and pretty and has an enjoyable, swelling middle third. It moves and develops, which is rare on a record painfully lacking in ideas. Similarly the clattery, stop-start percussion on the mostly-electronic ‘Cover Up’ has some twitchy potential. The very fact that Lucy Rose was able to make the album she wanted despite the tremendous pressure major labels put on their artists to bring in proven names, is to her credit and this is by no means a commercial duffer; worse albums than this have sold masses, so the gamble could well pay off in the market place. Rose's voice is always likeable, accessible and expressive, sadly in the case of Work It Out it rarely has anything very interesting to express.