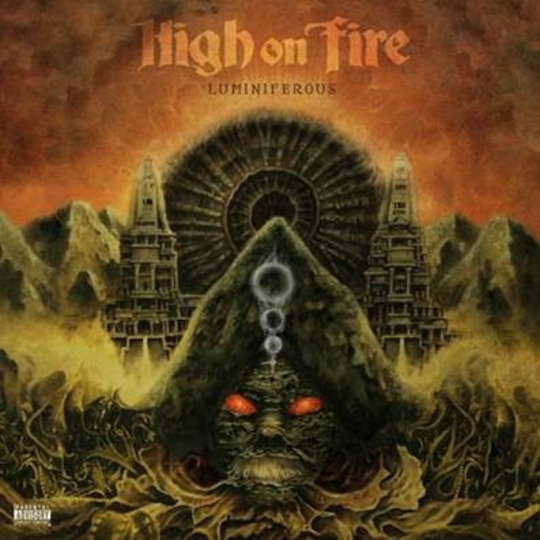 Before beginning to discuss the merits of Luminiferous, the seventh High on Fire album, let’s clear something up. Over the past decade and a half, High on Fire have proved themselves one of the best, and most consistent, heavy metal bands on the face of the planet. This is a truth often overlooked in the metal press, who continue to express far more excitement about Sleep reunion shows than about a new High on Fire record.

It’s a shame that High on Fire haven’t won more vocal acclaim, particularly for their superb last trio of records. Death is the Communion, from 2007, was deliciously heavy; 2010’s Snakes for the Divine added a new sheen to the band’s sound, and then 2012’s De Vermis Mysteriis ripped it off again in favour of a new layer of coruscating sludge.

So what does Luminiferous do with the band’s sound? Well, given that Kurt Ballou is still in the producer’s chair, it’s unsurprising that this record sounds just as filthy as De Vermis Mysteriis. It explodes out of the traps with ‘The Black Plot’ and barely pauses for breath from then on. Matt Pike’s guitar riffs are as colossal as ever, and the songs are so well constructed that they lurch freely from one highpoint to another with what appears to be minimal effort. ‘Carcosa’, ‘The Sunless Years’ and ‘Slave the Hive’ all pass by in the blink of an eye in a four track burst that does all the things High on Fire do so well, but arguably even better than usual.

It’s only on ‘The Cave’ that the trio take a different approach. Jeff Matz’s bass solo and an unusually restrained performance from Des Kensel behind the drums complement acoustic guitars and some of Pike’s most well constructed, soaring playing in his career to date. It’s a reminder that High on Fire can do more than just the back breaking sludge that they have made their name with, and a welcome pause amongst eight other intense exercises in power and mass.

Lyrically, as may be predicted, Luminiferous sees Pike continue with some of his obsessions. Conspiracy theories have greatly informed his lyrics since Death is the Communion and things are no different here. As ever it’s hard to take this side of the band too seriously, but there are some memorable lines here. Expect to find yourself singing “They’ve got us wired to the reptile brain” in the shower (from ‘Slave the Hive’) sometime soon. Once again it’s ‘The Cave’ that is an exception, with Pike providing a confessional take on his battles with alcoholism and life on the road.

If Luminiferous has a flaw then it is its length. Fifty-three minutes of crushing sludge metal is all well and good if taking a more atmospheric route, but High on Fire’s more gung-ho, vaguely classic metal influenced, approach would occasionally benefit from a bit more conciseness (a criticism you could also throw at previous records). On the whole, however, this is a difficult album to throw too many critiques at. This is the sound of one of the twenty-first century’s best heavy bands, and there are few signs that they are going to be anything less than that for some time to come.