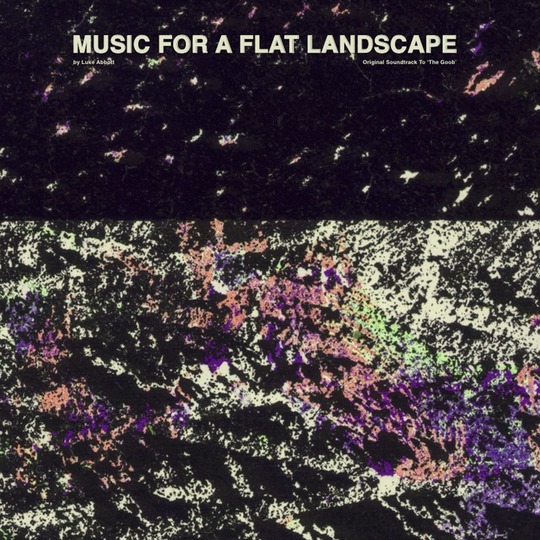 A film set in his native Norfolk, scoring The Goob must have been a real no brainer for Luke Abbott. Since joining the ultra cool ranks of the Border Community roster, he's flown the flag for his region, an area all but totally culturally drowned out by the gentrified wastelands to the south, explosive creativity to the north, and a bountiful collection of less-than-complimentary Alan Partridge quotes. The fact that this soundtrack's original RSD-exclusive release date was delayed by Record Store Day clogging up the factories with exclusive Foo Fighters seven inches (or whatever) winds up a blessing, allowing it space to breathe as an artwork in its own right. Music for a Flat Landscape really shows off Abbott's full graduation from the savvy, powerful and inventive technician heard integrating slick Warp style beats with retro Kosmische synth-o-spheres on 2010's Holkham Drones to a fully fledged electronic composer, continuing where 2014's Wysing Forest left off, striving to coerce his tools into new and unheard timbres, imagining new colours, and working vacant emotional spaces into the usually energetically driven realm of electronic music for the cause of The Goob.

The album, like the photography of Norfolk throughout The Goob is closer to a wistful pastoral dream than meditation on reality. 'Ascending Spirals' opens the album in contemplative fashion, sending shimmering tones eponymously emanating like ripples in a pond, while 'Tape Bells' immediately follows with aptly bell-like notes, hissy and scattered like rain drops in a lethargic autumn shower. Drama does sporadically ensue - via the racing arpeggiations on 'Night Bike', or the unquenchable tension of the barely present hiss on 'Asperity Drone' and 'Landscape 3' - but for the most part, this is quiet dream music. Field recordings (or at least what sounds like field recordings) are often present in the mix, fleshing out the gaping chasms of sparse synth beauty with earthly flesh - seagulls seem to weep over the finale of 'Landscape 3', and real rain seeps into the hiss of 'Tape Bells'.

There are plenty of masterful forebears to this brand of spacious, melodic ambience. Eno's solo synthesiser finale to 1978's seminal Music for Airports (entitled '2/2'), or Autechre's icy emotional finale to 1995's Garbage EP ('VLetrmx'). But it has never been so fully and excellently utilised in a complete original film score. Music for a Flat Landscape's closest mainstream cinematic aesthetic cousin is perhaps Vangelis' eternal and deceptively sleepy Blade Runner (which never quite resorts to typical 'action' tropes, and remains staunchly romantic throughout), yet this comes across as devoid of all that self-important grandeur, playing through as a subtle self-contained suite, existing apart from the film it scores. The impact of Abbott's self-imposed minimalism on this score enables him to focus on the key elements of melody and texture, eschewing any major rhythmic importance for Rothko-esque lakes of colour and deep immersive emotional soundscapes.

The three-and-a-half minute 'Landscape 4' summarises Abbott's approach here perfectly, presenting a stunningly beautiful and ostensibly simple cycle of notes, leaving enough vacant foreground for a film to play out, but with the vast emotional depth of a single calculated suite of sparse, stunningly beautiful ambience. So few contemporary composers are working with such scarce supplies of notes and instrumentation (incredibly accomplished English minimalist, Laurence Crane is a notable exception), but Luke Abbott squeezes every shred of feeling from those synth keys and modular knobs on these ten cues. This music soaks up every discernible hint of anger and aggression, leaving only a calm agrarian longing, and the simmering feeling of peaceful resignation. In short, this is utterly gorgeous, and both the best ambient and best soundtrack album to come out in 2015.