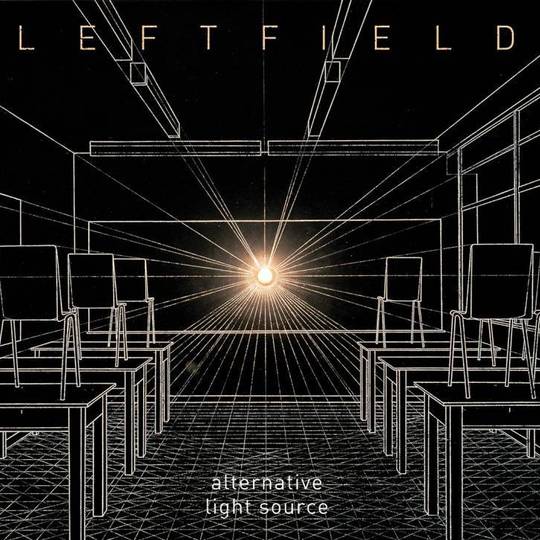 Leftfield are a product of their time, but it’s hard not to romanticise their legacy. Leftism — their ’95 debut — felt thoroughly ahead of its time. Its fusion of dub, house and trance-tribalism still resonates across dancefloors today. And 1999 follow-up, Rhythm And Stealth — arguably their most complete work — played intoxicating industrial beats off against searing techno. The LP’s key track infiltrating our homes via iconic advertising; ‘Phat Planet’ etched unwittingly onto the national psyche, through the clout of brand-name stout.

But the group came to a sharp halt when the duo — Neil Barnes and Paul Daley — parted ways in semi-acrimony back in 2002 and left… errr… Leftfield in permanent limbo. That is until Barnes resurrected the brand, ostensibly as a solo project in 2010. And in keeping with the group’s already MBV-esque work rate, he’s taken his time crafting new material. But the release of Artificial Light Source sees him pick up pretty much where Rhythm and Stealth left us 16 years ago. The album largely adheres to the tried and tested Leftfield template; electronic intensity, pounding beats, rhythmic maximalism.

’Universal Everything’ is a vast pulsating soundscape, replete with all the attack, sustain and release you’d expect from their best work. The same goes for ‘Storm’s End’ and ’Shaker Obsession’, the former swirling with dark energy and jagged synths that soar amid the oscillating beats, the latter hammering at your ears with almost overwhelming mesmeric fervour. Of course, it’s not all bombast. Title track ’Artificial Light Source’ and ’Dark Matters’ both surge with tidal beats that ebb and flow in a shimmer of electro ominosity; stuttering ambience converged across dystopian breaks.

But while the instrumentals service Barnes well, when guest vocalists — once a hallmark of Leftfield’s work (John Lydon’s vocals on ‘Open Up’ still feel perfect) – the album broaches less solid ground. TV On The Radio’s Tunde Adebimpe easily turns in the best effort; his murmurations on ’Bad Radio’ an ideal pairing slipping amongst Barnes’ serpentine bounce, while the vocals on ‘Little Fish’ become so intertwined in the mix, it seems impossible that the raw intensity of the track would work without them.

But elsewhere it loses its way. Poliça’s Channy Leaneagh, wails through ’Bilocation’s sinewy, dystopian-by-the-numbers rhythms. While closer, ’Levitate For You’ — with it’s half whispered/half yelped soul — jars sharply against sleepwalking beats. Although the nadir is reached on ’Head And Shoulders’, on which Sleaford Mods frontman Jason Williamson barks bon mots (“Scalp and chips/chicken in a basket”, “My body’s turning me on/I’ve got a touch on”) like some tedious people’s poet. It’s not quite as abhorrent as his lairy turn on The Prodigy’s ‘Ibiza’, — in which he played the role of an errant attendant on a carnival waltzer who’d accidentally wandered into the studio — but it’s pretty close and certainly more cringeworthy.

There’s been a swathe of Nineties dance nostalgia in the last 12 months, from Aphex Twin to The Prodigy, and Leftfield’s return — or rather Barnes solo album which is what this truly is — falls somewhere between those releases; being nowhere as exemplary as the former, but not as irredeemable as the latter. If you’ve eagerly awaited new Leftfield material, this is unlikely to disappoint. But Barnes would be wise to speed up his process for album number four, because Artificial Light Source isn't strong enough to incite the kind of affection that will sustain another prolonged absence.