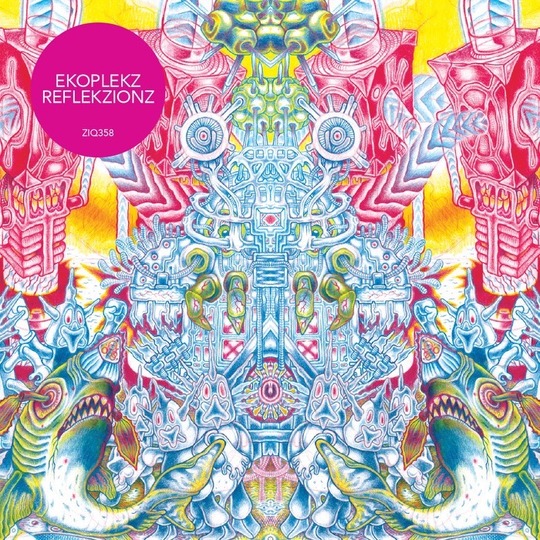 If any one electronic musician in the world is on a roll right now then it’s Nick Edwards, the man behind Ekoplekz. One would think having released arguably the two finest electronic records of 2014 – Unfidelity and Four Track Mind, both on Planet Mu – plus a couple of excellent EPs – Influkz and Rock la Bibliothek – that Edwards might be taking it easy in 2015. Not a bit of it. He’s already back with a new full-length for Planet Mu, this time entitled Reflekzionz, and thus with another 12 tracks of eminently listenable, and extremely thoughtful, contemporary ambient techno.

One uses the word 'contemporary' loosely in Edwards’s case, of course. He isn’t one for rewriting the rulebook, but he is such a connoisseur of sounds that he can balance various influences against one another in a fashion that makes his music sound very different to the vast majority of his contemporaries. Simply put, Edwards is a master of articulating his own unique vision of electronic music, which is a world painted with a faded palate, but therefore one that feels a lot more human than some of the more obtuse sounds in the electronic music universe at present.

This is apparent from the off, with ‘A Caustic Romance’ using its bouncy, hypnotic beats and surprisingly direct synth lines to introduce new listeners to Ekoplekz’s rather delightful little world. It’s also proof that, whilst he’s still clearly indebted to many of his formative influences, Edwards is still experimenting with sounds previously alien to the Ekoplekz project. It might just be the most instantly accessible piece he has ever put together.

Similarly welcoming atmospherics return throughout Reflekzionz. As ‘Downtone’ fades into the ether, for example, it almost feels like Edwards is beckoning the listener into a fabled beyond. Perhaps a universe less cluttered and more airy than the one we currently inhabit. ‘Midnight Cliffs’ gives off a similar vibe, with its slow and spacey introduction being gradually enhanced by waves of sound that feel remarkably like a fresh seaside breeze.

‘Dubnium 268’, meanwhile, is utterly euphoric, retaining the faded aesthetic of the rest of the album but marrying it with a glorious Technicolor sunset. One senses that this is the sort of music Autechre would make if, instead of moving towards increasingly dense musical structures post-Chiastic Slide, they had decided to embrace more openly the immense warmth that permeated Incunabula, Amber and Tri Repetae.

Whether Reflekzionz is any better than anything Edwards has released in recent years – and here I’m not even including the wide variety of non-Ekoplekz material he’s put out – is rather a moot point. I’m not entirely sure the point of Reflekzionz is to be better than Unfidelity, for example. This is the sound of a musician intent on honing his craft to the point where it’s more or less as close to perfection as it will ever be. Reflekzionz shows how far along that path Edwards is, making it both an immensely pleasing addition to his catalogue for old fans and a perfect introduction for new ones.