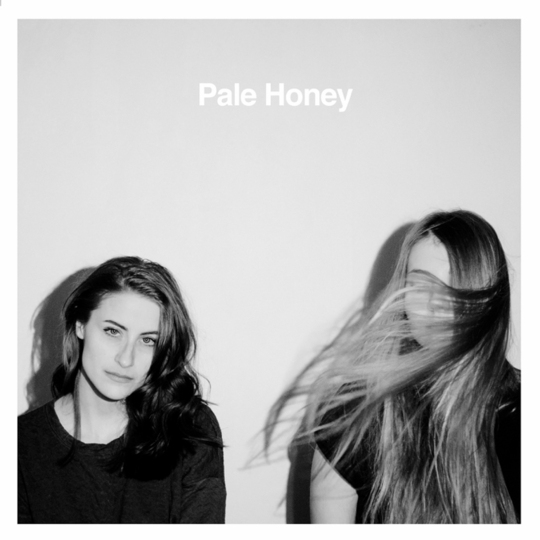 The debut, self-titled album by Swedish duo Pale Honey – Tuva Lodemark (guitar and vocals) and Nelly Daltrey (drums) – makes for an at times enervating listen. The terse titles of its ten tracks – ‘Desert’, ‘Tease’, ‘Fish’, ‘Youth’ – match the minimalist approach to instrumentation, but also reflect the curious disconnect of the band’s approach. There is just something so flat, so alienated about the collection of music, when taken as a whole, that it ultimately ends up failing to engage.

The band modus operandi is for a bass-heavy intro, as found on ‘Head’, ‘Fish’, ‘Youth’ and ‘0100’. This will then lead to some sparse percussion and a quick burst of fuzzy guitar on some of the more animated moments - the likes of ‘Bandolier’ and ‘Tease’ - and some synth splashes (‘Youth’, ‘Sleep’) accompanied by Lodemark’s vocal.

The words – what is sung and how they are delivered – really fix the tone to one of a kind of studied malaise. In a voice never quite raised in anger, but neither, too, ever really cracking a smile, Lodemark unenthusiastically intones phrases that build up the sense of un-well-being. “This city was never mine”, she states on the opening track. “Can’t be enough for you”, says ‘0100’. “No-one left to follow me / No-one left to bother me”, she recounts – bleakly – in ‘Bandolier’.

Even when, lyrically, things perk up or even get sexy, the delivery remains deadpan. So it is hard to tell, when Lodemark sings “I think to myself, what a wonderful world” and “I just wanna be in your bed” in ‘Fish’, or “You can be my lover, dear” in ‘Bandolier’, whether the band are being ironic, sarcastic or sincere. And while some cowbells make a welcome appearance in ‘Fiction’ and ‘Tease’ to liven things up a bit, and there are some enjoyable bursts of colour courtesy of the synthesisers deployed in ‘Youth’ and ‘Sleep’, the sound palette throughout generally remains too restricted, too untextured to ever really step up the excitement levels.

Of course it could be argued that what we are hearing, here, is an effective mirroring: the [lack of] emotions expressed in the lyrics being matched and reflected back in the music and the flatness of its delivery. Which is true, of course. It’s just that it just doesn’t make for much of a listening experience, as you find yourself casting around for something – a strong feeling, a riff that reaches your gut or your heart – to engage with: some texture, some emotion.

The album draws to a close with its strongest track. On ‘Sleep’, finally, it feels as if something of Pale Honey’s personality is emerging. Not just the lyrics themselves, but also the delivery of lines like “Hold me for a while / I’m only low on my own (…) I only sleep when I’m alone” sound genuine and arresting. You want to hear more, for maybe the first time on the album, just as it draws to its end.