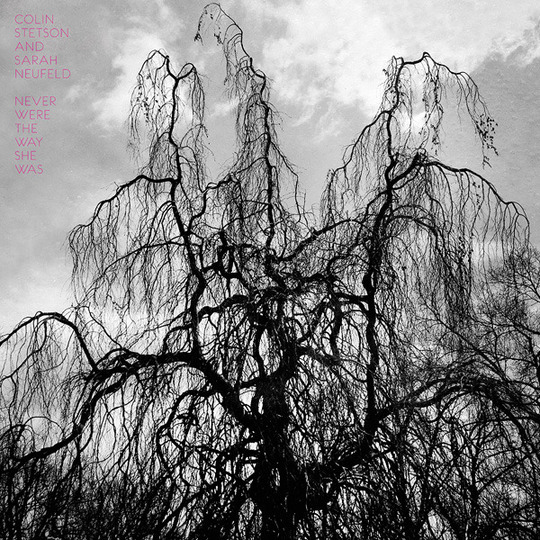 After a triad of acclaimed albums that enacted a 'New History [of] Warfare' in a range of styles fusing classical minimalism, improvisational jazz, metal, and post-rock, and with some high profile guests for the sung and spoken word sections (including Laurie Anderson and Justin Vernon) where could Colin Stetson go but to the rebirth of the planet, after that sonic apocalypse? Never Were the Way She Was doesn’t explicitly announce itself as a sequel to Stetson’s trilogy, and it’s very much a collaboration ('and' rather than 'with' Sarah Neufeld) but it’s certainly intended as an exploration of a different set of emotions.

Briefly, and for those unfamiliar with their work, Stetson and Neufeld are two Arcade Fire affiliates (on baritone saxophone and violin, respectively), rapidly making a case for Arcade Fire being Stetson and Neufeld affiliates. More than anything since Bitches Brew and On the Corner, Stetson’s New History Warfare series convinced fans of post-rock, metal, and electronica that 'avant-jazz' isn’t a swearword, while sending them back to Simon Reynolds’ original manifesto for post-rock for a reminder that this is what the genre (still largely mistaken for crescendo rock) could have been. Similarly, Neufeld’s Bell Orchestre offered an update of classical minimalism in the spirit of post-rock, and in a sense filled the void left by Rachel’s.

As Stetson and Neufeld put it, their album follows ‘the metaphorical narrative of the life of a girl who ages slow as mountains; excited, exalted, and ultimately exiled in her search for a world that resembles her experience.’ With only a few seconds of field-recording, at the start and end, and no vocals, interpretation is left more open than that, but there is a distinct movement away from sounds that evoked artillery, tanks rumbling through streets, and the desolation of survivors picking their way through ruins. ‘The Sun Roars Into View’ opens the album with a sense of slow growth, of seedlings pushing through ashes perhaps, although it’s nature at its most sublime that the album tends to evoke over subsequent tracks– the rise and fall of mountains and oceans rather than anything 'bucolic' and 'pastoral' as too much 'classical-classical' settles for; thus, when Neufeld provides bird-like screeches on 'With the Dark Hug of Time' those birds seem more like carrion crows than any whimsical larks ascending. The Stetson-of-old does appear toward the end as if 'The Rest of Us' and the title track enact the arrival of civilisation (expressed through jerkier, more mechanical rhythms) before fading out on the noise of rain, washing away the stain of what humanity has done.

But that’s only one possible reading of the album, and (without sounding too competitive) another would focus on the dialogue with other composers and/or genres that Stetson and Neufeld engage in. Whatever comparisons spring to mind, they’re always to their credit, i.e. tracks and and three are: what Phillip Glass should be doing right now; track two: pretty much what Jacaszek does right now (but with a computer); track four: what someone with a baritone sax the size of a bazooka has to do mid-album in case he has an aneurysm – let the violinist take over while he makes noises like a donkey dying in a church; tracks five and seven: what Godspeed should be doing right now; track six: what Burial should be doing right now (mimicking the two-step rhythm of dubstep on miked up keys, and propelling the track forward with blasts of horn that seem more forceful, more contoured, more weird for coming from the body rather than a machine, however expertly programmed).

This may be not a dramatic leap forward – Stetson’s in a position to found his own Fire Orchestra, and has chosen comparative intimacy, for now – but for those who’ve acquired a taste for the extreme physicality of his music, this is another fine record, whose developments are many, if subtle: more nuanced and melodic crooning in places (to counter the death-metal roars elsewhere), that two-step clatter (hence 'what Burial should be doing now'), and field recordings that could be used more extensively without feeling like a slavish imitation of Steve Reich and/or Godspeed. Collaboration, above all, is what keeps both artists fresh, and while Neufeld isn’t as obviously re-inventing the violin (besides the occasional use of reverb and/or delay that multiplies into a swarm of shrieks) the pair work perfectly; long may they continue to work together. Overall then, a triumph for instrumental music that’s more than genre-hopping: it’s genre-reviving.