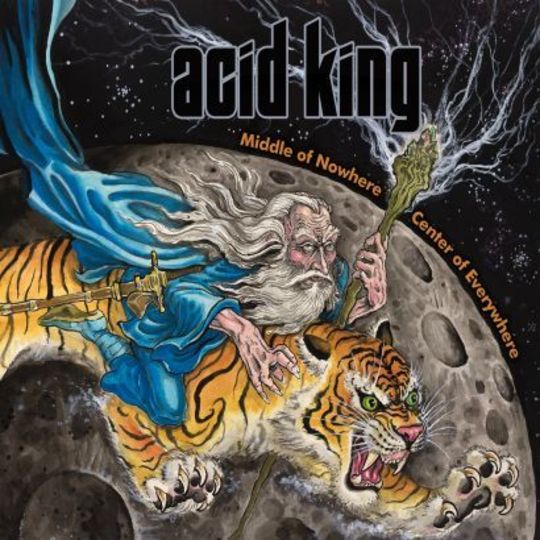 After a decade of churning out punishingly heavy stoner metal records, California trio Acid King entered hibernation after 2005’s Acid King III. That record proved to be their crowning achievement - a slice of menacing, psychedelic grit that perfected the seismic sound of their early work – as well as their last record for over a decade.

If it wasn’t clear already then, Acid King don’t deal in half-measures. The band cultivate their ominous odysseys largely through improvisation, forging records organically in their Bay Area rehearsal space. Offerings in the past have sounded like the work of something subterranean – monolithic journeys that often push the seven-minute mark, submerged in deep, noisy guitars and clattering drum phrases. Enigmatic front-woman Lori S’s howling vocals are the nucleus of the cell, standing stoic amongst the chaos like a lingering ghost. The band have stayed true to this hypnotic formula throughout their career, Lori S summing up their ethos recently as: 'there are no rules, we do things how we want to'.

So what’s changed in ten years?

In truth, not a lot. The band’s fourth offering, Middle of Nowhere, Center of Everywhere, doesn’t revitalise Acid King so much as resurrect them - the unhinged guitars sound identical to records of old, Joey Osbourne’s drumming stays typically scattershot and Lori S shows no sign of age. The most noticeable change is in the production – where past works relied on the raw, unspoiled grit of rougher recordings, Acid King’s approach to earth-shifting is cleaner and more layered this time around. Cuts like the pummelling ‘Red River’ sound like three Acid Kings playing at once, the mix coated with endless strata of feedback and noise that thickens the band’s corrosive mixture into something even heavier, like molten liquid swirling in a cauldron.

All in all though, Middle of Nowhere fits so snugly into the Acid King discography that you’d be forgiven for suspecting cryogenic freezing. Ten years is enough to cause even the most well-oiled machine to rust, but Acid King emerge not just unscathed, but totally pristine – the record’s 54 minutes, generously spread across just eight tracks, are charged with the same brutal energy of yesteryear, trudging at the same tectonic pace. The ingredients remain exactly the same.

This proves to be the record’s gaping flaw. As captivating as Acid King’s recipe for aggression can be, Middle of Nowhere treads so little new ground that it borders on redundancy. As well as tracing over their career-long template, the record is strewn with indulgent instrumental ventures that make for a sadly uniform end product – ‘Silent Pictures’ rotates brashly between just two bass chords, swapping howling verses with wailing guitar solos for a wholesome nine minutes, a structure that Acid King repeat unapologetically at similar tempos across the record, creating bland sonic doppelgängers that leave it in pretty formless territory. The band deserve major credit for maintaining their explosive chemistry after so long out of the game, and their knack for unbridled volume is still hugely impressive, but a little invention doesn’t feel like too much to ask at this point.