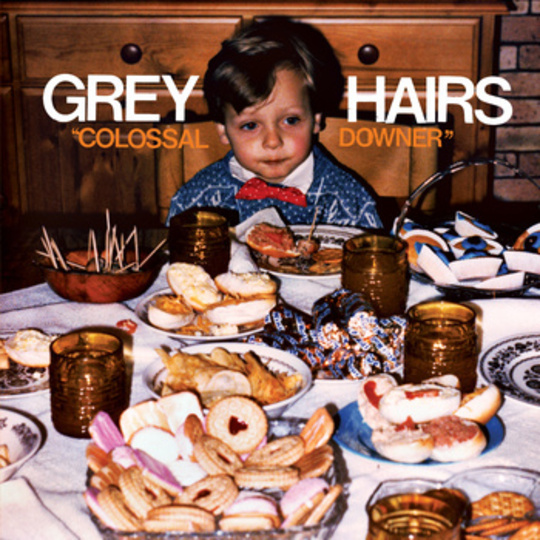 While many of Nottingham's up-and-coming young artists continue to put the city's music scene on the map, let's not forget those with a little more experience and know how (we refuse to call them veterans). Sleaford Mods might be the first name on everybody's lips and while Jason Williamson and Andrew Fearn's recent ascent represents a triumph in perseverance, there's another group who've been around the block a few times just starting to create a buzz of their own. Enter Grey Hairs, four thirty-somethings who've been described as a midlife crisis band among other things during their short lifetime, much of it spent moonlighting from other groups – Fists, Cult Of Dom Keller, Bus Stop Madonnas, Kogumaza and Lords among them.

It's been an interesting journey for the four-piece of James Finley (vocals), Chris Summerlin (guitars) and Dave Biggs (drums) and Amy Case, who joined the band last summer replacing former Fonda 500 bass player Bod, who played on the record. Thought to be an album depicting the trials and tribulations of the working week. Colossal Downer, their debut LP, was originally conceived as two individual EPs. 'Man Gulp', which became Side A, and 'Little Fingers' over on the flipside.

Which in a nutshell collects twelve pieces of visceral chaos, their collective caps bullishly doffed towards Sub Pop's more abrasive protagonists with a smattering of post-punk thrown in for good measure. Make of it what you will, but any record containing songs with titles like 'The Handpisser', 'Creepy' and 'Emergency Banger' is guaranteed to be an uneasy listen, and that's exactly what Colossal Downer provides. Albeit a compelling one at that.

Introducing the record with a hail of amplified feedback, 'Ship' declares Colossal Downer open. While the majority of its lyrics remain indecipherable, one suspects they amount to a veritable tirade against the man. Sounding more pissed off than Pissed Jeans, it sets the scene quite aptly for what follows.

More short sharp shocks appear in the shape of 'Emergency Banger' and 'Dave's Van', each clocking in at less than two minutes, each fuelled by pent up anger and delivered with venomous aggression. Joy Division's 'Glass' is referenced on the rickety angularisms of 'Jesco', while the six minutes long 'Creepy' - a monologue by Grey Hairs standards - takes its cue from Pixies more protracted moments.

Elsewhere, there's sludgey riffs galore courtesy of 'Anxiety Dream' and 'The Hedgehider'. And while 'Martha' takes an obtuse turn to the left, 'Badmotorfingered' makes a claim for creating a new genre all of its own. Fusing rhythm and blues licks with jazz style interludes served up in a king size bun of adrenalin soaked ferocity. Better still is 'White As Whispers', which follows a similar narrative to that of Protomartyr, whose Under Color Of Official Right soundtracked last summer's new wave reinvention.

Ultimately, Grey Hairs have conjured up an album that pretty much sums up where we are as a generation today. Angry, upset, confused, disappointed, outraged, yet strangely in acceptance of our lot. Despair no more. Middle aged angst just got its own back.