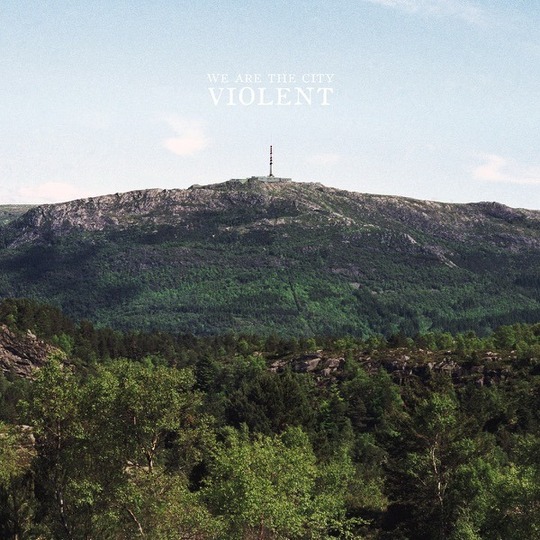 Violent is the debut full length from Canadian indie-poppers We Are the City. It is not violent. It is pretty great though. It sounds like Mew in parts. For the majority though, I’m most closely reminded of the wondrous Ramona Falls. Of course, there’s loads more to it than that, but just in case you’re reading this in a rush on a lunch break or some such and debating whether to scroll to the next tab, if you (like me) thought that the two Ramona Falls albums were worked of almost unparalleled genius, this is an album you don’t want to miss.

It all starts with the pounding syncopation of ‘Bottom of the Lake’. Strident drums combine with what sounds like a continual arpeggio of glockenspiel (no, really), before everything devolves in to a crunchy and intensely melodic chorus “Just the same, you could sink to the bottom of the lake”. 'Legs Give Out' continues the off-kilter rhythmics, with more than a nod to The Flaming Lips. This time, some heavily ridden Rhodes piano provides a glorious instrumental hook as the song threatens to explode. The band seem intent on showing that they really know their musical onions. Almost annoyingly, they pull it off every single time. Single ‘King David’ begins with a more straightforward, decidedly Mew-esque, yet supremely satisfying intro from David Menzel, taking the complicated biblical king as its lyrical theme. “Now you’re thinking about me. You should be thinking about God…Or should I fill my mind with God? Are there better things to put inside my head?” asks vocalist Cayne Mckenzie. The question appears to remain unanswered as yearning and doubt coalesce in the song’s cacophonous climax. One thing is clear though: this is a fantastic song.

Throughout the album, the drums of Andrew Hucullak take this band to another level. ‘I Am, Are You?’ is just one example, as a solid, yet supremely inventive hi-hat pattern dominates the first third of the track. On this song, the whole band are in perfect synergy. Once again, the guitars shimmer and crunch, synths swoop and snarl, time signatures shapeshift with alarming regularity, but through it all, the heartbeat is Hucullak, elevating a potentially messy sound into a clarion call of clarity and purpose.

One of the potential pitfalls of an album such as this is that those involved get so excited with their expertise, studio wizardry and so on that their songs end up formless and lacking shape. Not with We Are the City. Each song here is built on the firmest of foundations. Even ‘Baptism’, perhaps the track here which pushes the envelope to its outermost bounds, features a chorus I defy you to avoid singing in the shower if you allow it to take root. As it smoulders to a stunning conclusion, you may, like me, feel the need to check that the track hasn’t changed. Yes, it is still the same song. Yes, it is. Honest.

The hooky heart which resides at the centre of this album provides great hope that We Are the Ocean are a band for the long haul. There are many places for their songwriting mastery yet to take them. In spite of making an almost willfully quirky album, we find that We Are the City have simultaneously made one of 2015’s better art-pop debut albums.