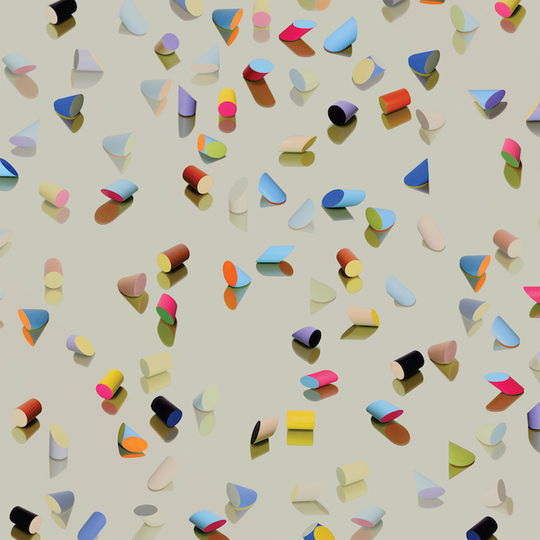 Nootropics, the second set from Jana Hunter and Lower Dens, was a difficult beast to get your head around. It was dark, stark, heavily textured. It was the kind of album that struck me as incredible on days (usually grey) of similar characteristics, but which struggled somewhat, when the weather brightened and life took on that more positive sheen. It was an album that required work from the listener. A powerful statement, sure, but one whose meaning only gradually became obvious. What was clear was that Lower Dens were a band of purpose and vision.

This year brings us the release of the surprising Escape From Evil. I say surprising because, whisper it, this is a bona fide pop album. Sure it’s dressed in a spectral sheen of Eighties synths and shimmering guitar lines, with Hunter’s unmistakable vocals front and centre, but at its heart lie some glorious pop songs. This is the sound of a band coming of age. There opening quartet of ‘Sucker’s Shangri-La’, all syncopated drum patterns and plangent guitar, ‘Ondine’s’ promise of “I would treat you better, hold on” delivered in a chorus of glorious harmonies which breaks out from a bed of atmospheric dissonance, the injection of pace brought by the synth leads of ‘To Die in L.A.’ and the Eno-esque ‘Quo Vardis’ is among the strongest opening salvos of album of recent memory.

Perhaps it’s the bevvy of production help which has brought Lower Dens in to the light. Perhaps that’s doing them a disservice. Chris Coady (Beach House, Cass McCombs), Ariel Rechtshaid (Sky Ferreira, Vampire Weekend) and John Congleton (St. Vincent, The Walkmen) are among those outside influences who have had a hand in the creation of this album. Perhaps more crucially, the band's own input to the production and mixing process was strong too. As well as Jana Hunter, Walker Teret is involved, as is Chris Freeland, who recorded their debut album in 2010. The result is a band perhaps more comfortable with itself than at any point in its career so far. The use of producers with pop pedigree speaks of a move towards wider appreciation and recognition, whilst the in-house elements of the production at the same time point to a group of singular vision with its hand firmly on the tiller.

Escape from Evil is being fairly squarely marketed around its lead singer. I don’t know if Jana Hunter wants to be the story herself, but for me it is the synergy between the whole group which is most noteworthy here. ‘Electric Current’ has an almost playful shifting and sliding of bass, drums and synths without which the vocals would not be able to shine to anything like the same degree, for instance. Throughout, the drums of Nate Nelson are imaginative, soulful even, whilst never losing their metronomic heartbeat. ‘I Am the Earth’ is a particular rhythmic highlight in which he combines beautifully with the bass of Geoff Graham, never flashy, but always drawing attention. As Hunter’s guitar trades squalls with that of Will Adams at the song’s conclusion, the album reaches its height. By the time of ‘Non Grata’ and ‘Company’, it even sounds like they’re having fun. Not something I expected to write in this review. Although, it has to be said, the lyrics remain as cheery as ever ("I wish I could feel anything at all", begins the latter track).

Escape from Evil might not change the world (unless you live for slightly off-kilter Eighties-style pop records, in which case, you should be thanking Lower Dens immensely), but it is all the more impressive because of its unexpected accessibility. It shows that Lower Dens have the ability to turn their hand in multiple musical directions whilst never losing their core. And in Jana Hunter, perhaps a star will be born in 2015.