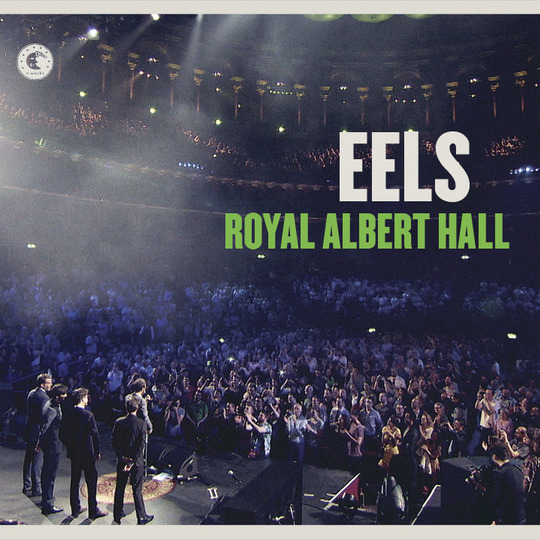 Difficult as it is to envision that Mark Oliver Everett cries at night for lack of love from the critics, you still get the feeling that he might be held in even higher esteem if he’d just been a little more work-shy. The relentless rate at which he’s released albums over the past couple of decades means that a new Eels release seldom feels like an event, and therefore is perhaps likelier to be overlooked than if he only popped up every three or four years. Both 2013’s boisterous Wonderful, Glorious and last year’s stripped-back confessional exercise, The Cautionary Tales of Mark Oliver Everett, failed to make much of a dent on the year-end best-of lists, despite some liberal sprinklings of the old Eels magic across the pair.

He did, at least, enjoy some hefty personal recognition last summer, receiving the freedom of the City of London in the same week that he and his band recorded this new live album at the Royal Albert Hall - and only four years, too, since the same city’s constabulary suspected him of being a terrorist as they spotted him strolling through Hyde Park. Eels are by no means the most incongruous rock band ever to have played the famous old venue, even if they’d delivered as full-throttle a set as they were capable of, but it is testament to the craft and care with which E approaches the group’s live shows that proceedings were very much tailored to their environment.

When they toured Wonderful, Glorious in the UK in early 2013, Eels played a slew of rock clubs and showcased the more raucous side of their catalogue, taking the stage decked out in Adidas tracksuits and incorporating some delightfully silly audience interaction. Last summer’s run in support of the considerably mellower The Cautionary Tales, though, saw them in more traditional concert halls up and down the country and - as the accompanying DVD attests - the band wore their sharpest suits for the occasion. It’s a visual representation of the way in which the gigs were specifically designed not only to complement the quiet, contemplative material of the album they were backing, but also the surroundings in which the band found themselves.

E stays behind the piano primarily, delivering cuts from The Cautionary Tales with a vocal fragility and sensitivity matched by his band’s softly, softly approach. The early stages have them working in the sonically and thematically compatible likes of ‘Mansions of Los Feliz’ and ‘My Timing Is Off’, reworked subtly to suit the tone of the new songs; E repeatedly apologises, tongue firmly in cheek, for each track being a “bummer.” Gradually, jauntier material is worked in - ‘Grace Kelly Blues’, ‘I Like Birds’, a gorgeously simplistic take on ‘Fresh Feeling’ - without ever feeling jarring.

What sets Royal Albert Hall apart from typical live records, though, is that the show is presented in almost totally uncut form; E’s sharp chatter between songs stretches to three or four minutes, at points. Normally, that’d seem awfully indulgent, but here it’s nothing short of necessary; the Eels live experience has long since been about far more than the music. Ruminations on the venue - “what a dump!” - extensive introductions to the band - “he makes the glockenspiel soft rock-enspiel!” and even an elaborate Phantom of the Opera nod, complete with costume, all make the cut; in what was a staple of the tour, E claims early on to have been denied permission to play the venue’s organ, only to return for a second encore, decked out in Phantom garb, to deliver renditions of ‘Flyswatter’ and ‘The Sound of Fear’ through the old pipes later on.

You could argue that the inclusion of what is obviously a visual gag on a live album is bound to fall flat, but that’s why the DVD is being packaged with the physical Royal Albert Hall as standard; these gigs were shows in every sense of the word. That said, it’s still nice to have the audio on its own, if only because when you’re watching Everett running into the crowd to dole out hugs at random, or kissing the spot on the stage that John Lennon once stood before proclaiming it “tastes more like Keith Richards”, it’s easy to forget how lovingly and intelligently this guy treats his back catalogue; Royal Albert Hall is bursting at the seams with superb reinterpretations of some real classics.