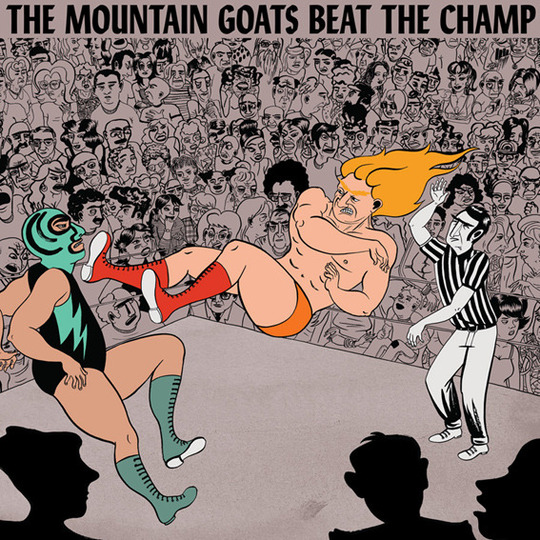 Beat the Champ is the fifteenth Mountain Goats album. It is also, at least on first appearances, a concept album about professional wrestling, which emerged from John Darnielle’s desire to 're-immerse [him]self in the blood and fire visions that spoke to [him] as a child'.

Assumedly that explains why Beat the Champ is more violent than your average wrestling match. It’s more like one of those deranged amateur bouts that Louis Theroux encountered on his wrestling focused episode of Weird Weekends. The wrestling world Darnielle paints is full of people being stabbed in the eye “with a foreign object” and having their faces “torn to shreds”. More importantly, however, it is also a world that takes its emotional toll on its participants. The crucial moment comes in ‘Heel Turn 2’, when Darnielle sings a plaintive “I don’t want to die in here”, marking the point at which the visceral blood rush ends and the spiralling descent into frustration, depression and anonymity begins.

There’s a loneliness Darnielle attaches to the wrestler that speaks to all of us, and which seems particularly appropriate for the sportsperson or the musician, for those among us who rely in some way on the adulation of others. The second half of Beat the Champ thus feels like a journey of self-discovery, albeit one in which the answers are not always entirely pleasant. The album reaches a bizarre mix of starkness and humour on ‘The Ballad of Bull Ramos’, which seems to be a paean to a late wrestling star turned truck driver ravaged by some combination of accidents, blindness and diabetes in his later years. The closer ‘Hair Match’ prompts Beat the Champ to end on a similarly mixed emotional note. It’s a tale of humiliation – in which match loser suffers a public shaving post-defeat – but features a declaration of love in its conclusion that, in the wider context of the record, strangely seems utterly appropriate.

It’s also probably the most expansive-sounding Mountain Goats record to date, less because of the occasional use of horns than because of the album’s dynamic variety. There’s a far heavier use of piano than one would expect from an album about wrestling, but the more restrained tracks that rely on it are balanced neatly against the punk blast of ‘Choked Out’ and the cavalcade of drumming that dominates ‘Werewolf Gimmick’. This ensures that Darnielle’s use of what could easily become gimmicky subject matter remains firmly grounded, anchored as it is to some impressive, and highly suitable arrangements; the gorgeous piano coda of the aforementioned ‘Heel Turn 2’ is a particularly good example.

This is a long way from the lo-fi folk Darnielle first began producing 25 years ago, however it’s still quintessential Mountain Goats. What perhaps nudges this into the top tier of Mountain Goats records is its complete assimilation of Darnielle’s storytelling abilities, which have enabled Beat the Champ to take on a life distinct from previous records whilst retaining a glimpse of everything you could ever have loved about this band in the first place. A fun, but deeply human, record.