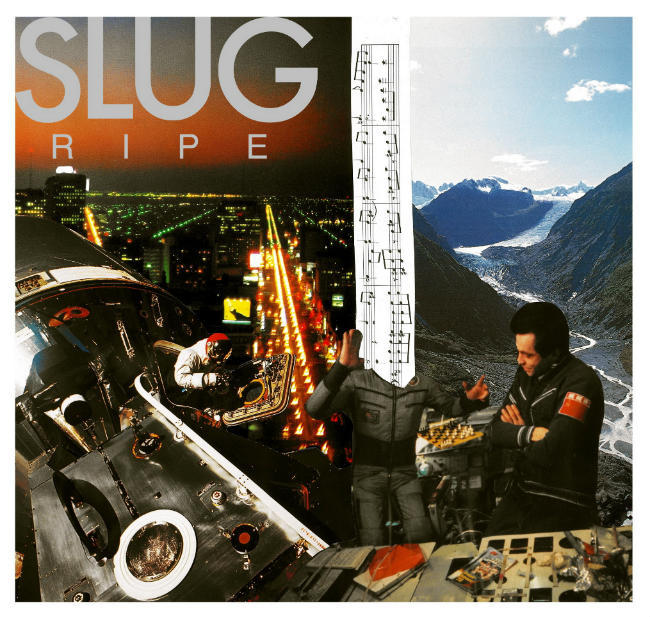 A creative tour de force which marks the arrival of a new pop maverick.»

Slug is the brand new musical venture from the mind of Ian Black, a merrily disruptive influence on the North East music for more than a decade. His debut album 'Ripe' is released on Memphis Industries. With Slug, Black wanted to get away from the tinnitus inducing noise rock of his formative bands, letting the idea dictate the song's form and sonic palette. Black says of the album "'what ifs' play a massive part in ripe. what if we use a stoner metal riff and use it like a dub bass part or what if we combined the drumming style of John Bonham with James Brown beat and the squelch bass of Claudio Simonetti and Fabio Pignatelli". Taking inspiration from film soundtracks (Enter the Dragon, Suspiria), 20th century abstract and minimalist music but also the rock and funk chops of Led Zeppelin, Prince and Funkadelic, the resulting album is concise, unselfconscious, idiosyncratic and exquisitely executed. Animators brothers quay, Phil Mulloy and Jan Svankmajer oblique approaches to subject matter also rubbed off on black and lend the slug album an air of the hypnagogic. 'Ripe' opener grimacing mask tackles how to break the cycle of personal and work related problems. Cockeyed rabbit wrapped in plastic focuses on the rocky foundations of apparently immutable institutions of power. 'Greasy Mind' is the most pop moment on the album that sees Zeppelin matched with 80's Madonna and screaming guitar solos. Running to get past your heart rides a wave of simplicity with a three note distorted bass riff, a one line chorus purely based on the phonetics, bongos and drums recorded with two vocal mics. 'Kill Your Darlings' is a straight to video horror film soundtrack dealing with how, as an artist, you have to avoid treating each creation like one of your kids. The album was recorded at Field Music's Roker studio with Peter and David Brewis on production duties. The Field Music brothers also return the favour for Black who toured extensively with their band as bassist. They play on the album and in the surreally fun yet precision engineered live band where they're joined by Andrew Lowther on bass and Rhys Patterson. It was playing with Field Music that gave Ian the impetus to start Slug "you cannot be on the road for a year with the guys and not feel inspired. sometimes that helps create a sense of self belief that you can create your own thing.....however delusional that maybe." Slug have made one of the year's most inventive and rewarding debut long players. 2015 is 'Ripe' for their picking.
description from www.roughtrade.com