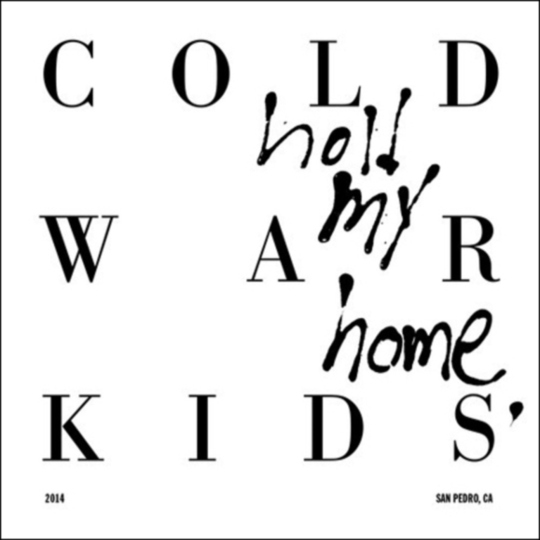 It seems barely possible that Cold War Kids are releasing their fifth full-length already. For one, it seems only five minutes since the band were being heralded as the next big thing, saviours of rock and roll, the future of music and so forth upon the release of their debut, Robbers and Cowards. Newsflash, that was nine years ago. Makes you feel old doesn’t it? If, somehow, like me, you’ve missed the intervening three releases (sorry Cold War Kids), what greets you as this new album gets into its stride might come as something of a surprise.

Hold My Home is a mature, fully-realised piece of work. The versatile howl of frontman Nathan Willett is still the band’s centre-piece and primary calling card, but in place of taut and occasionally tentative indie, this record packs a diverse but never less than muscular, widescreen punch. Opener ‘All This Could Be Yours’ begins with strident piano before sinking into a phalanx of Hammond organ as Willett pines “I have been waiting for you to realise that all of this could be yours tonight”. It is a strong start. ‘First’, confusingly sequenced second, veers dangerously close to Ryan Tedder territory before a barrage of snare heralds a cinematic chorus.


And so it goes on. ‘Hot Coals’ is the first track to primarily rely on a guitar riff as its main driver, while the chorus soars high on the back of Willett’s falsetto croon and some pleasingly dissonant guitars. ‘Drive Desperate’ slides in, all Abba keys and bass groove, before coalescing in to the kind of bar-room blues that made Cold War Kids their name in the first place.

What is exciting as the album veers on is that this is a band who, aside from the ever-present USP of lead vocal and the dry, withdrawn vocal sound it is recorded with, everything else is up for grabs. What works best for the song? Percussive piano? Ok, they’ll go with that. Down the line it seems like guitars from the delay-laden school of The Edge might work best: they are comfortable going there too. Meanwhile the rhythm section is never less than equal parts dialed-in and yet elastic, alive enough to expand and contract a song’s capacity at a moment’s notice. In short, Cold War Kids are several bands at once. They have creativity in spades, yet somehow each fine-tuning, each iteration of their arsenal still sounds like 'them'. While many bands have the mis-placed confidence to try and reach for the stars like this, showing that they can be all things to all men and be masters of all trades, sadly few bands can lay claim to that kind of ability. Cold War Kids are one such act. They’re a something for everyone kind of band. The U2-aping ‘Hotel Anywhere’, with its qurky synth leads, is immediately followed by the irresistible skewed pop of ‘Go Quietly’. ‘Flower Drum Song’’s guitar and bass assault is counter-balanced by the beautiful blues of ‘Harold Bloom’, while the album closes on the undulating swing of ‘Hear My Baby Call’ and its brave melodic and harmonic choices.

Cold War Kids are a band in control of their destiny. They are a band to love, a band who are growing and drawing us along with them. Care to join them as they find their way home?