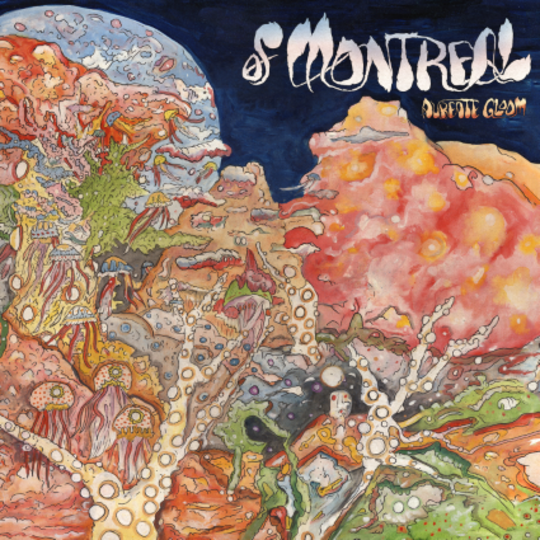 It’s odd to have an Of Montreal album billed as being a return to form, as Aureate Gloom has been. A return to which form, exactly? The form they took when they were a jingle-jangle twee-pop band? Or the form they took as an electro-funk freak troupe? Or more like the twisted Americana of their last record? The idea of a return to form is nonsense. Almost every Of Montreal release for the last ten years has been basically the opposite: a continued resistance to form.

This has always been half the fun. Even if you didn’t like what Kevin Barnes was trying out on a particular album, at least it was fully committed to some wild idea of itself, and offered the genuinely unexpected. That’s why the biggest failures in Barnes’ discography aren’t really failures of quality, but more failures of ambition and uniqueness. That’s the problem with Aureate Gloom. There aren’t many examples of re-tread in Of Montreal’s discography, but this feels like a diluted distillation of the clutch of records which came before it. The result is an album which has its closest kinship with False Priest. They don’t sound at all alike, but they both tread the water of a recent creative period.

Having said all of that, of course there are some new elements to Aureate Gloom. It’s still Kevin Barnes after all. Five years ago, nobody could really have imagined an Of Montreal album opening with a song about the recently deceased Egyptian journalist Bassem Sabry, for instance. It’s a welcome surprise. When Barnes’ default lyrical mode is intense introspection or – at the other end of the scale – wild fantasy, it’s refreshing in 'Bassem Sabry' to hear him looking outwards and staying grounded for a change. (As grounded as calling all leaders “cellophane punks”, anyway)

Beyond that, although many of the album’s elements are recognisably recycled, new juxtapositions of old techniques bring out fresh results. It’s interesting to hear what happens when Barnes puts his fragmentary song writing within the constraints of a real band for the first time. Disorienting swerves in texture and arrangements suddenly aren’t so easy. Songs like ‘Last Rites at the Jane Hotel’ have to make use of subtlety, relying on only a new drum beat, tempo shift, or the introduction of an instrument to move from section to section. If nothing else, it’s good to hear Barnes pushing himself into new methods of working.

Since the mid-Noughties, Of Montreal albums have effectively been solo records for Barnes. The switch back to full band arrangements, recorded live to tape, in highly concentrated sessions has given his last two records a new energy. But while Lousy with Sylvianbriar coupled this recording approach with robust verse-chorus songs, Aureate Gloom also has a looseness to the song writing itself. Some tracks take sudden left turns into the unknown, others – like album highlight ‘Apollyon of Blue Room’ – drive and crunch through repetition for their duration. And although this is effective in small doses, Aureate Gloom stretches spontaneity to the point of feeling rushed. None of these songs are among Barnes’ best.

More so than most bands, you have to take the rough with the smooth with Of Montreal. Barnes’ absolute refusal to rein in impulses or cut down on excess is what makes his best work exceptional. The day that he starts self-censoring is the day he stops making any good records at all. Could you think of anything worse than an overthought Of Montreal album? Still, it’s hard to forgive Barnes the accusation of repetition, and that’s what undoubtedly rears its head on Aureate Gloom. He delivers his best when he abandons everything he’s ever done before. Let’s hope nobody can even consider describing the next one as a return to form.