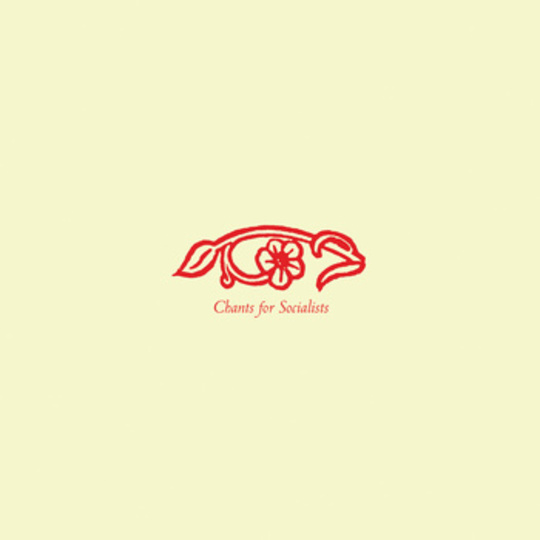 Some songwriters spend whole careers writing about nothing but themselves; never leaving the confines of their own head: their own lives, loves and fears. Not so proper-indie institution Darren Hayman. The one-time Hefner frontman has dedicated the last third of his 20-year-career to a series of themed projects: a collection of EPs based around British holidays, an instrumental record about London’s outdoor public swimming pools, a trilogy dedicated to life in Essex including a genuinely stunning concept album about sixteenth-century witch trials and the English Civil War. What unites all of these projects is Hayman’s gift to sift the personal stories from the mundane and the macro - to make the distant, the ultra-everyday, or the apparently dull seem warm, relatable and interesting, both emotionally and intellectually.

Chants For Socialists is probably the ultimate extension of this. Here he’s using another man’s words: those of nineteenth-century polymath William Morris. They’re words about socialism, the most macro and far-reaching of social perspectives, a worldview and political structure rooted in forces at play on a grand scale. The great contradiction is that he’s taking ideas and words written by another man in another time and using them to create the most personal, relatable and nourishing album of his career.


The jumping off point is Morris’s original Chants For Socialists pamphlet, a collection of stirring left-wing hymns published in the late nineteenth century. Hayman doesn’t recreate it faithfully: the original 'chants' were meant to sung to popular melodies of the time, making their ideas and their spirit as accessible as possible. With a century’s distance it’s now difficult to relate emotionally to a song that opens “Come hither, lads, and hearken, for a tale there is to tell,” so Hayman has painstakingly reconstructed the material, not just making it scan across a record of none-more-indie melodies, but making sure the words still have some power to comfort and inspire.

They’re great melodies as well - melodies to match Morris’s spirit. This is the cleanest and warmest Hayman has sounded in years, from the sparkling riff that motors along in ‘Mayday 1894’ to the lovely, hymnal ‘A Death Song’ and the rat-a-tat waltz of ‘Down Among The Dead Men.’

There’s a satisfying match of form and function here. The album’s stirring, massed choral peaks feature a choir recruited from Hayman’s local fanbase with musical ability no consideration at all, giving those sections an honesty and endearing lack of polish. This is the “rolling ocean, the giant wave” he sings of on ‘The March Of The People’- it really is “the workers marching on.” The result is an album that we can all take ownership of- we could all have been a part of it had we been walking past at the right time. It’s real leftist ideas generating real art.

Hayman works hard to subtly marry the distant and very different world of the nineteenth century, politically and musically, with the present day; to that end alongside the indie fuzz and the battered folkie acoustics, Hayman plays Morris’s actual piano, tuneless and broken, while artwork for the limited edition 12-inch is available printed on Morris’ personal press. If such desirable objects feel suspiciously like commodity fetishism (thank you Mr Marx) the whole album is available to download on a pay-what-you-like basis, which is only right and proper for songs-for-the-people.

You could argue this is overly simple. That these songs don’t represent the modern world at all - that lyrics fetishising work, where the prevailing attitude is that “the labour is sweet,” have little relevance in 2015, especially to Hayman’s mostly middle class, educated fanbase who aren’t generally salt-of-the-earth trawlermen and carpenters. Cynics would say this is an idealised, romantic version of socialism that never really existed in such an uncomplicated form. That no-one listening to this is going to be any wiser about who to vote for, or how they can change the world, even a little bit. These aren’t real solutions.

That’s missing the point. Hayman has said he wants these songs to be a comfort and inspiration to those of us on the left, and this makes a lot of sense. In an election year, 12 months on from the passing of Tony Benn, in a society centred in the middle classes and led by the public school elite there is painfully little real leftwing culture to take comfort in. Hayman, via Morris, is channelling a simpler, cleaner left; a politics for working class people that serves as a recharge and a boost to its murkier twenty-first-century equivalent. Lyrically these are really hymns, with all the beauty, hope and faith that implies- their messages are of unity, of power in the hands of ordinary people, of hope that together we can make a difference. This is the left of Bevan and Beveridge as much as of Billy Bragg. An uncomplicated politics of heart and common sense. It does you good... it really does.

Hayman has given us a beautifully crafted love-letter to the real humanity that is the soul and centre of socialism, both sad and sweet, melancholy and inspiring - a collection of songs that belong to everyone and cement Hayman’s place as a nationalised treasure.