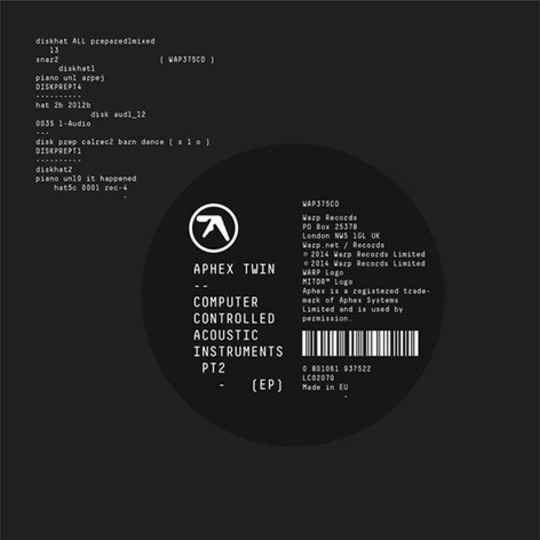 I am fully prepared to accept that my disappointment at the release of Syro last year places me in opposition to the popular consensus. Whilst Richard D James returning to Aphex Twin just a year after Tomorrow’s Harvest had dropped out of the ether was scarcely believable, it was not, to my mind at least, quite as much of a cause for celebration as that record’s sudden appearance. Given that Drukqs has always seemed to me like the logical conclusion of the Aphex Twin project, fulfilling a role that The Campfire Headphase never did for Boards of Canada, I find it hard to see Syro as much more than an unnecessary addendum, let alone a vital and significant extension of the Aphex Twin legacy.

What Syro detractors like myself feel the album lacked is not so much moments of brilliance and ingenuity – which are present, throughout – but instead a feeling of progression. Syro was the last thing many an Aphex Twin fan must have expected: an Aphex Twin record seemingly designed purely to satisfy fans of James’s early brand of ambient techno. For an artist whose career has largely been defined by a stubborn refusal to conform to convention, it was a release that seemed almost alarmingly straightforward and by the book.

It was also pretty much the last thing anyone expected from Aphex Twin’s return, which must have prompted James to break into a wide Cornish grin. In contrast, Computer Controlled Acoustic Instruments pt2 is everything one would expect from an artist who has just released arguably their most accessible and least multi-layered record to date. James’s love of the piano, notably emphasised through Syro’s beautiful closing track, ‘aisatsana [102], is at the heart of this EP.

Washes of delightful minimalist piano are the glue that holds these 13 tracks together, representing the calm serenity that James’s work can often exude despite its wilful complexity. Elsewhere, however, the instrument is used to its full capacity as a prepared sonic tool, often alongside various percussion instruments, to give an intriguing glimpse into where James’s warped creative mind is currently heading. In other words, it’s much more of a logical post-Drukqs step.

Opener ‘diskhat ALL prepared1mixed 13’ (anyone else remember when Aphex Twin song titles were at least vaguely comprehensible and memorable?) does a good job of introducing the EP’s basic premise. Vaguely funky, and surprisingly reminiscent of Portishead in its almost smoky early atmospherics, this is James stripping back his love of beat to the point where every melodic device and sonic texture functions as part of his rhythmic device. This is certainly a philosophy he has explored before, but here it is feels like an end purpose in itself as opposed to being a side effect of other investigatory techniques. It’s also highly listenable, no less so than Syro in fact, recalling accessible contemporary classicist exponents of prepared piano such as Hauschka in its jittery, off-kilter dances.

In short then, this EP is a welcome reminder of James’s ability to utilise decidedly avant-garde ideas in a manner that, although acutely alien to our idea of musical normality, is nevertheless engaging and inspiring. Anyone who feared James had lost his desire to push forward after hearing Syro need fear no more.