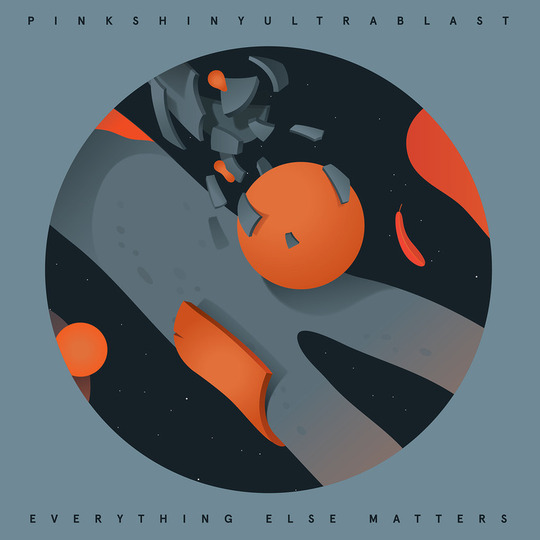 Hailing from St Petersburg and named after an Astrobrite LP, Russian five-piece Pinkshinyultrablast are seemingly masters when it comes to obscure reference points relating to their craft. Heavily influenced by the Thames Valley sound of the early Nineties (I'm rather bored of the term 'shoegaze' by now), they first came to this writer's attention via 2009's excellent Happy Songs For Happy Zombies EP. Comparisons to Lush and the Cocteau Twins reigned supreme, largely due to Lyubov Soloveva's breathy, ethereal vocal. However, scratch beneath the surface and it's clear there was much more on offer than just a retrospective homage to a past Pinkshinyultrablast were unlikely to have experienced first time around. Bathed in effects suavely complimented by electronic elements far beyond the inaugural first wave two decades beforehand, the future looked bright and then... silence.

Not that they've spent the interim resting on their laurels. Instead they've taken the time to hone their sound and craft a record largely borne out of frustration at the humdrum surroundings they find themselves exposed to on a daily basis. Dismayed by their native city's listless music scene, Everything Else Matters seeps with a vibrant energy radiating through its eight individual pieces. More importantly, Pinkshinyultrablast are just as likely to reference the likes of Steve Reich, Stars Of The Lid or Autechre as any band associated with Creation Records.

Take opener 'Wish We Were' for example, which nervously shuffles into life fusing discordant rhythmic patterns a la Stereolab. Soloveva's voice provides additional instrumentation, a facet notable throughout the record. And yet lying beneath it all is a distinctly melodic underbelly that highlights Pinkshinyultrablast's penchant for pop hooks, as previously demonstrated on Happy Songs For Happy Zombies' standout moment 'Blaster' some six years earlier.

While the lyrics render themselves indecipherable, it's difficult to envisage what their presence would add to the mix when presented against a collage of sound such as this. 'Metamorphosis' does what it says on the tin, shedding its embryonic sugar-coated veneer before blossoming into a resounding colossus reminiscent of Sigur Ros at their most elegiac. Brooding closer 'Marigold' follows a similar path. Clocking in at just under nine minutes, each second evoking widescreen visions of a pulsating journey by rail. Trans Europe Express it may not be, but there's a sense of fictional translucence about its pastoral beauty all the same.

'Holy Forest' and 'Umi' bridge the gap between the Happy Songs... era and the present, while 'Ravestar Supreme' suggests the four-minute pop song is alive and kicking and secretly reinventing itself in a Russian cathedral. Refined yet audacious both in execution and delivery, Pinkshinyultrablast exemplify sonic pulchritude. Despite its lengthy gestation, Everything Else Matters offers living proof all good things come to those that wait.