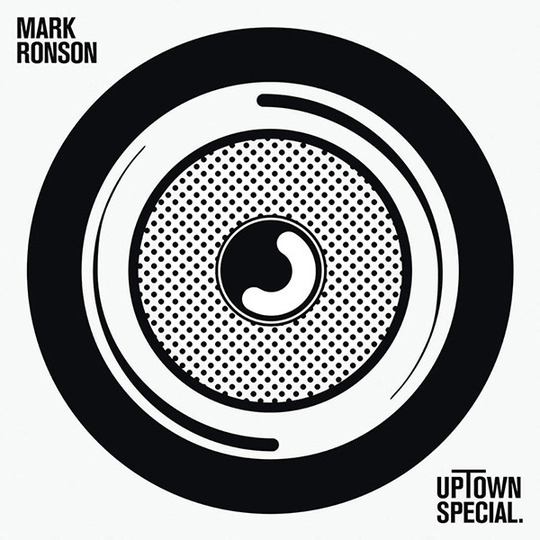 Enough has been written about the success of 'Uptown Funk', it's inescapable, a bona fide modern day mega hit. It's gone to number one all across the world, smashed its own streaming record three times, first pop single to split the atom etc...but what of the album? Does Uptown Special break under the weight of expectation created by its all conquering lead single? Or does it live up to the hype?

Throughout the album Ronson plays the role of puppet master to an impressive collection of musical talent. The unmistakeable signature tone of Stevie Wonder's harmonica begins proceedings on 'Uptown's First Finale'. It acts as a palate cleanser, readying the listener for the retro sounds of the Seventies/Eighties soul and funk to come, and also as a sort of authenticity blanket, protecting Uptown Special against accusations of cynical appropriation and pastiche. It says to fans and detractors alike 'Look people! We've got the real thing!' The beautiful, lilting refrain bookends the album, appearing again again on the closer 'Crack In the Pearl pt 2'.

Three songs feature the vocal talents of Tame Impala's Kevin Parker. The first, 'Summer Breaking', is the first indication that Uptown Special isn't going to be a straight out funk and soul throwback, featuring instead a Steely Dan-esque jazzy chord progression beneath Parker's ethereal, dream-like vocal. 'Summer Breaking' also introduces us to another unlikely ingredient, the lyrics of Pulitzer Prize-winning author Michael Chabon. 'I wanted lyrics to push farther than most of what’s going on in R&B and pop today,' says Ronson. Indeed the Chabon-penned couplet “Avenues empty as 44 clips/Cargo ships and teen zombie ships riding their whips” lets the listener know this isn't your usual top 40 fare.

Up next is the superb neo-funk jam 'Feel Right' featuring Mystikal, with Bruno Mars takes care of all the necessary old-school soul hollers and yelps. Cynics might say there's nothing revolutionary about shouting “Get down” over a greasy funk groove. But originality isn't what Ronson and co are going for here. It sounded great when James Brown did it and it sounds great here too. Above all else, it doesn't take itself too seriously. If you don't at least crack a smile when Mystikal spits “Excuse me, who me?! I got a lot of groupies, I ought to have a freaking doghouse like Snoopy!” this one isn't for you.

Surprisingly, for such a star-studded guest list, one of the strongest performances on Uptown Special comes courtesy of an unknown. Keyone Starr provides the soulful vocal on the irresistible Eightoes New York club banger 'I Can't Lose'. Co-written by Ronson with Jeff Bhasker, (Kanye West, Beyonce) the track demands an authentic voice. As if to prove he doesn't need to rely on his impressive rolodex of pop luminaries to provide a sprinkling of stardust, during the making of the album Ronson and Bhasker embarked on a southern road trip searching for that voice in the country's heartland. Starting In New Orleans and taking in Baton Rouge, Memphis, Little Rock and St Louis along the way they visited churches, nightclubs and bars before finding Starr in Jackson, Mississippi. The search was a fruitful one, whilst 'I Can't Lose' oozes cool with funky guitar riffs and a slick brass section, it is Starr's sublime, young Chaka Khan vocal that really elevates the track.

A criticism that may be levelled at Uptown Special lies in its essence as a collaborative record and it's a problem that can't really be avoided. Despite the white-hot talent on display throughout, the album perhaps lacks a singular voice. Like Record Collection and Version before it, the nature of using so many guest vocalists inevitably means the listener will have their favourites and so when a contributor only features once or twice it seems a shame. Indeed, parts two and three of the Kevin Parker trilogy 'Daffodils' and 'Leaving Los Felis' are so well executed one could be forgiven for wishing for a full album of Ronson/Parker collaborations. But then what, no 'Uptown Funk'? No 'Feel Right'?

'Daffodils' in particular is probably the strongest writing on the album. Another incessantly funky riff and a Billie Jean beat provide the backdrop for Parker and Chabon's woozy tale of a night spent high on a fictional drug “Drop another daffodil, sail right off the map til morning.” There are subtle nods to psychedelia here too. It's compelling stuff and testament to Ronson's considerable skill as a producer that he is able to unite so many disparate elements on one record.

There was an often repeated critique of Mark Ronson, mostly in snooty indie circles dating back to the release of 2007's ubiquitous Version. People would blithely say 'He got lucky' or 'Oh, he just puts trumpets on other people's songs' The criticism was undeserved at the time and with Uptown Special, it is emphatically blown out of the water. Mark Ronson makes records. And he's really, really good at it.